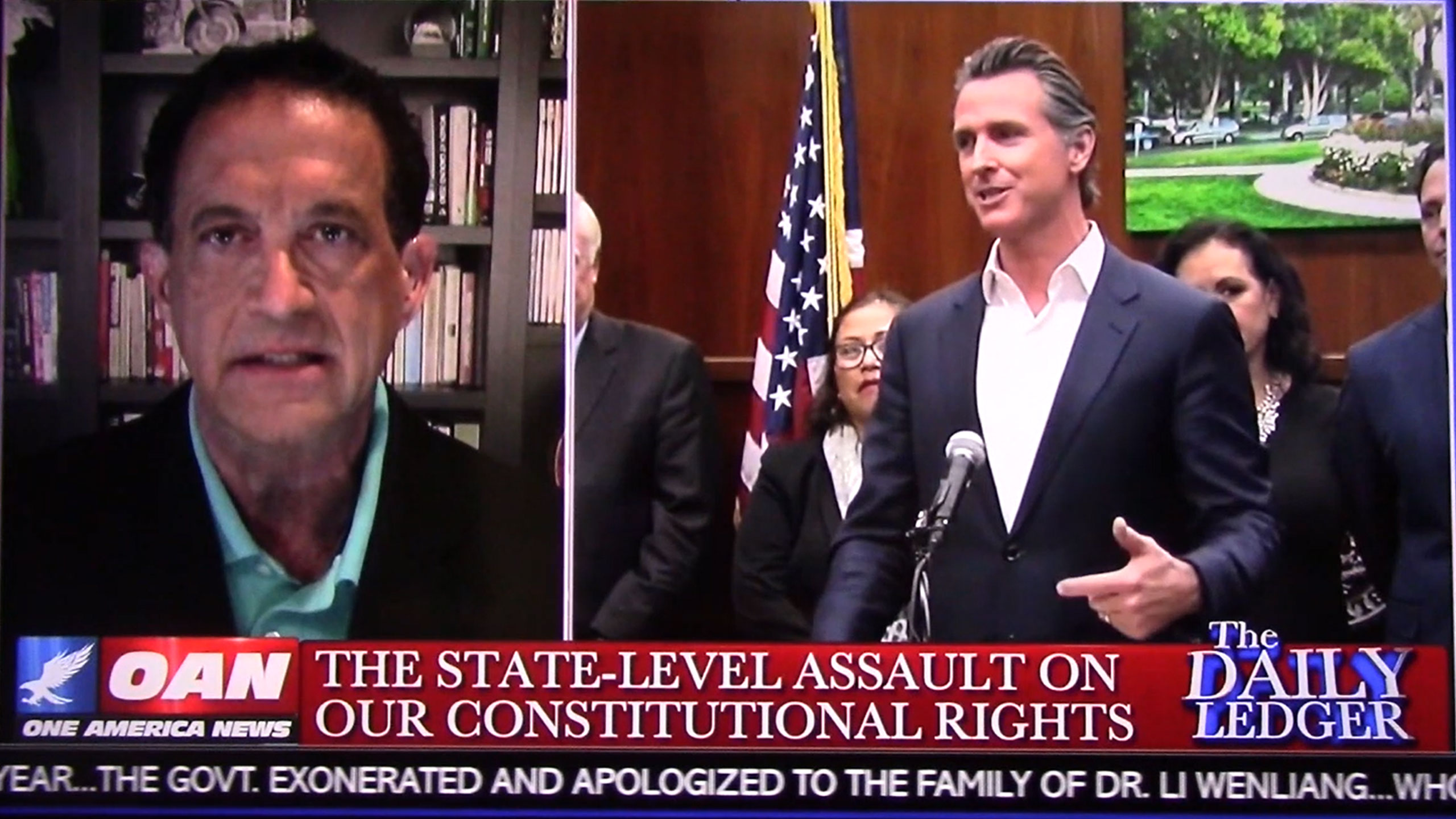 Graham Ledger: Page Six now the unprecedented state level assault on the constitutional rights of 40 million Americans in the once Golden State. Too many lemmings in California are just going along with a completely unconstitutional decree from a rogue radical governor by the name of Gavin Newsom. Joining me now, the founder of the American Truth Project and Daily Ledger contributor, Barry Nussbaum. Barry I’m telling everybody I know in California and in New York because apparently they’ve got the same edict going on there now. Yeah, this is time to defy and think about the Constitution and think about your constitutional rights and think about the nefarious pro-socialistic and anti-constitutional effort behind these edicts because there’s always a reason behind them.

Barry Nussbaum: Graham perfect lead in to my first thought, which is what is the reason behind them? You have emergency decrees coming out coast-to-coast. The worst one in California obviously just yesterday, that is literally throwing the constitution in the shredder. Now why is it being done? I looked up a bunch of statistics today. The H1N1, which was the biggest virus outbreak of recent times in 2009, affected 50 to 60 million Americans and several tens of thousands were killed. And we went about our business as if everything was normal. The amount of infected and the amount of deaths and believe me, I take them seriously is an infinitesimal amount compared to the past. Why, Graham, is the constitution being completely destroyed over a virus that’s a bad flu that is nowhere near, not even on the same scale as the last outbreak we had in the country. Are we getting a little too conspiratorial or is there something that you and I don’t know?

Graham Ledger: Now we do know. We know this is their M.O. We know Barack Obama did this. Never let a good crisis go to waste. And we know Newsom is following his footsteps. Constitutional violations? Let us count the ways real quick here, Barry.  By my count, I just went through this very quickly off the top of my head violation of the First Amendment, Assembly,right? Fourth Amendment. Fifth Amendment. Where’s the due process? Ninth Amendment. Remember? Remember the old Ninth Amendment? It’s a crazy little amendment in there. And the 14th Amendment, equal protection under the law. Equal protection under the law.

Barry Nussbaum: Well, look, they’re talking about shutting down interstate commerce, and travel between the states. That has never happened. It didn’t happen in World War II. It didn’t happen after 9/11. I mean, there has never been a war footing the United States has been on like it is today in the absence of war. And these responses are so over the top as if there are no individual rights in this country. There is no assembly. There is no business. There is no travel. There’s no interstate commerce. I’m very concerned. Is this all going to go away when this, as Newsom says, the curve gets flattened?

Graham Ledger: And that’s the problem. This is like a huge violation of the Fourth Amendment because this is tantamount to a search warrant, right? This is a massive search warrant searching for a virus in everybody’s home. Everybody’s guilty before they’re allowed to prove their innocence. This is not the way America is supposed to be operating. Barry, thank you.

The Hidden Truth About The Covid-19 Economic Cure