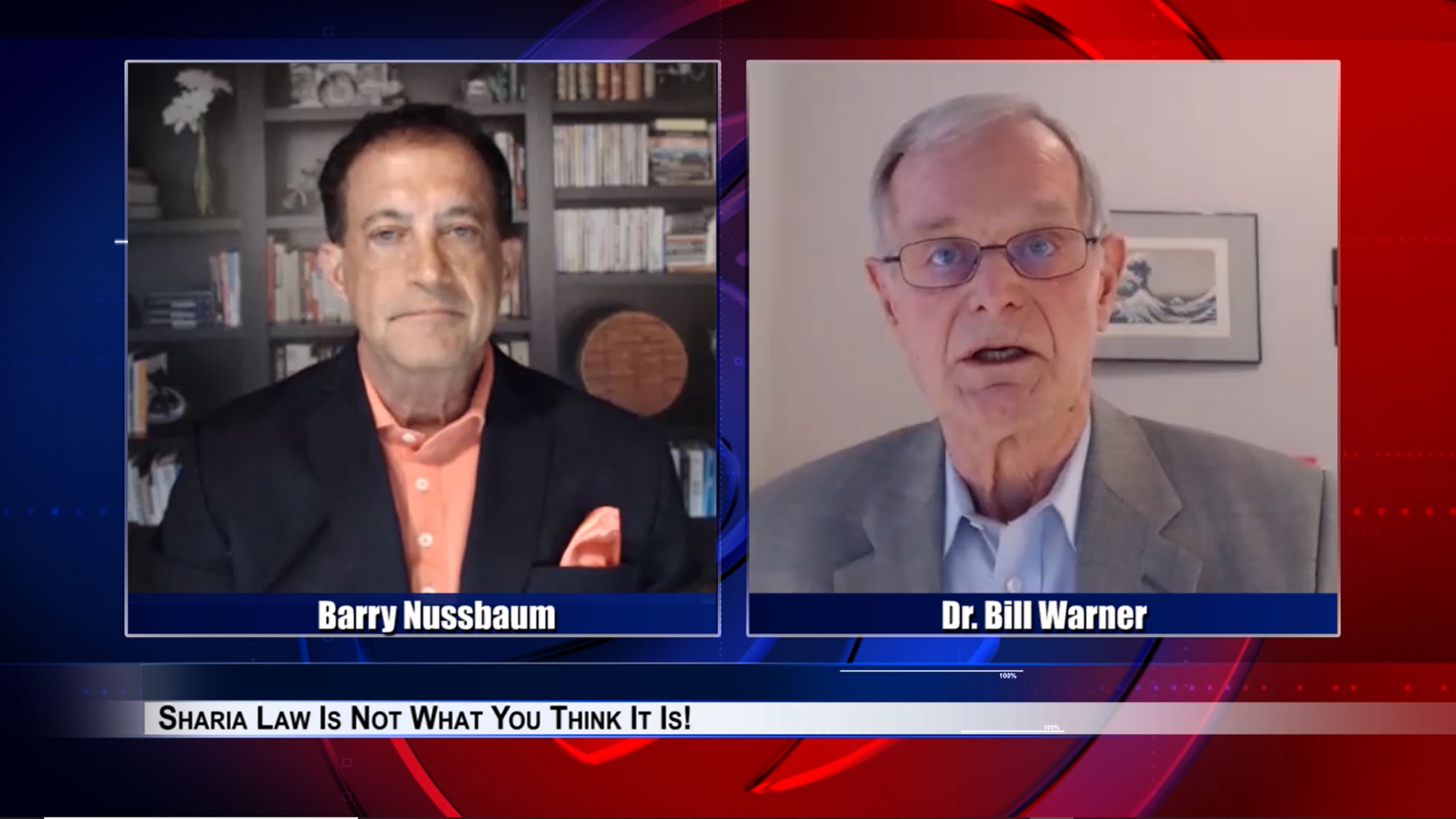 Barry Nussbaum: Let’s pick up talking about the requirements in Islam, about clothing. What are the specific things that differentiate the men from the women, as far as their outward attire?

Dr. Bill Warner: Well, I’m assuming here that they’ve moved to America and they’re wearing civilian or what we’d call just ordinary clothes. So, when you see a Muslim, the only way you might spot a Muslim if he’s standing there is if he wears a beard and there’s no mustache. Now, that doesn’t necessarily mean he’s a Muslim, but it is what we call a halal beard. That is, there is one of the rules that the Muslim male is supposed to, amongst other things, shave his armpits, his pubic area, and the mustache. But that’s a subtle thing and most Muslim men that I know, as I have many Muslim students, they just look ordinary. They’re just people. It’s the woman who looks different. And that’s with the hijab, the head covering and/or the rest of it. Of course, the most astounding one is the black garb with the black niqab. And that’s startling when you see it. I’ve never grown used to looking at it because it’s like, as I’ve said earlier, it’s like a wall between me and the woman.

Barry Nussbaum: Must be incredibly uncomfortable, especially in the heat.

Dr. Bill Warner: I have talked with women who have worn it, and they just say the worst thing is over your mouth. It’s like you’re trying to suck in cool air, and it doesn’t work very well.

Dr. Bill Warner: Who would volunteer to wear one of those? Really? And some of them, by the way, are made a polyester.

Barry Nussbaum: Got it. So, halal is the lifestyle requirements, including diet. Let’s talk about that a little bit. What’s different from, say, Orthodox Jews with kosher requirements?

Dr. Bill Warner: First off, let’s take this. It turns out that an Orthodox Jew’s food can be eaten by Muslims, and it satisfies the halal requirement. But in general, we’re only going to talk here about halal meat. Halal meat is done with the animal facing Mecca. And then the, “There is no God but Allah and Mohammed is the prophet.” Then the throat is cut. Now, the problem with this is, they’re left to bleed to death, and they’re still alive. And if you’re doing this on a major scale, this means that the other animals can smell the blood and there’s panic and adrenaline in their blood. This is not good. But basically, it’s in the process of killing. Oh, did I mention that only a Muslim can do this? So, as the meat system becomes more and more Islamicized because there’s more and more halal, this means more and more ordinary butchers can’t do the work.

Barry Nussbaum: Wow. How about finances? Sharia finance is something interesting. I understand there can be no interest on loans. Traditional banks and finance in the United States are bypassed if you are following the rules. Can you explain that?

Dr. Bill Warner: Sharia finance is based on the idea that you don’t pay any interest on the principal. Now, you may not pay any interest, but you end up paying other fees, which, oddly enough, turn out to be more than the interest rate would have been paid if you had an ordinary mortgage. So, there’s a lot about Sharia finance I do not understand, but I do understand this about it, Sharia finance includes paying the zakat. The zakat is a charity tax. And the charity tax includes paying for jihad. So, Sharia finance helps to support jihad. Now, there are many forms of jihad here, not just the cutting off your head or running airplanes into a building.

Barry Nussbaum: Let’s talk about that because that’s the word that we in America hear the most. And it is interpreted depending on who you talk to, a dozen different ways. So, let’s start with what is jihad?

Dr. Bill Warner: Well, there’s only one jihad in the sense of the word means effort. And that’s all it means, effort. And so, you can have jihad against staying up late and doing a book report. That would be a form of effort. Now, Muslims, of course, know what most of the jihad is associated with. And so, therefore, they say, “Oh, that’s not the real jihad. The real jihad is the greater jihad, which is the inner struggle that all religions have, that is, to become a better person.” Well, remember me, I’m the science guy, I do the counting? So, I took all of the Hadith. These are the traditions of Mohammed from Bukhari, which is the best-known collector of these, and there’s seven thousand of them. Twenty-one percent of these seven thousand Hadith relate to jihad. And of these, less than 2 percent, refer to jihad as a spiritual struggle. Instead, 98 percent we’re cutting off heads and killing kafirs. Kafirs are non-Muslims.

Barry Nussbaum: So, what is this story? There’s a lady in the House of Representatives here in the United States who talks about the struggle, and jihad is not killing others. It’s to be a better person.

Dr. Bill Warner: What she’s told you, that is the so-called greater jihad. She’s trying to divert your attention from the real jihad. Well, not real, but the other jihad, which is violence against the kafir.

Barry Nussbaum: So, she’s talking about the 2 percent and ignoring the 98 percent.

Dr. Bill Warner: Well, sometimes we have to do little fudging, you know. To make it look good.

Barry Nussbaum: You’ve spoken about the fact that the sword or the use of the sword or I guess in modern parlance, any violence against non-believers, is the least dangerous of jihad. What do you mean by that?

Dr. Bill Warner: Well, now, by the way, if you’re getting attacked by a Muslim wielding a knife in London, all of a sudden, that kind of jihad is the overwhelming importance. There are fewer people killed by jihad in the United States than do probably texting while driving, all right? So that’s what I mean when I say it’s not that bad. Now, if you or your family are involved in this, that’s terrible. But from a statistical standpoint, it’s not that significant, whereas producing a textbook which tells the lies of Islam is the jihad of speech and pen. So if you go to school here in the 7th grade in Tennessee, you’ll be told in the seventh grade in a book that Islam is the highest culture that has ever lived, that the highest point of human history was in the golden age in Baghdad and Spain. You’ll be told in this textbook that the first to give women rights with Islam. The first democracy, the first constitution, was Islam. And so, it goes on and on and on. And by the way, it’s suddenly and “Oh, Islam provides protection to the Jew and the Christian.” So, this is what you’ll learn in the textbooks, this is now planting basically propaganda lies into our children’s lives. And so, I maintain that that is more dangerous to us as a society than someone getting stabbed in the back or killed in a car crash.

Barry Nussbaum: Well, obviously, if you can see the army coming and they have whatever weapons, then the natural inclination of all humans is to defend themselves against the seeable, known enemy. What you’re talking about is attacked from within with an idea.

Dr. Bill Warner: Yes. And this is far more dangerous. And if it were just one textbook, but it goes on and on and on. I mean, I hear endlessly there’s so-called bridge building, interfaith gatherings. And I’m astounded as to how Muslims will look you straight in the eye and tell you a lie. Maybe it’s a lie of a half-truth. But on the other side of the equation, the clergy who are there be they Jewish or Christian, they just smile and eat it all up. This is disastrous.

Barry Nussbaum: So how is it getting approved? Well, I mean, you have education boards that review curriculum before it’s adopted by the school board.

Dr. Bill Warner: Yes, but they want to be tolerant in a multicultural society. And so, therefore, they don’t want to upset a minority. And even though there’s one point eight billion of them, Muslims are a protected minority. So, therefore, we do everything we can to keep them happy because we’re tolerant. We will tolerate anything, Barry.

Barry Nussbaum: Well, we may tolerate it right into our own destruction, Dr. Bill. And that’s what scares the hell out of me.

Barry Nussbaum: Thanks for joining us on American Truth Project. I want to thank our special guest today, Dr. Bill Warner. I urge all of you watching today to go to his website, Political Islam, and start ordering books. You’ve got your homework cut out for you. You need to know what he’s talking about before it’s too late. Remember, text from your cell phone the word truth to 88202. You’ll be signed up for our free text message service, so you’ll get this and all our videos for free on your cell phone every day or whenever we release them. And we never charge for any of it. For ATP Report, I’m Barry Nussbaum.

Related Topics:Dr. Bill WarnerIslamizationSharia
Up Next

Jihad Is the Battle and Intent to Conquer Non-Muslims