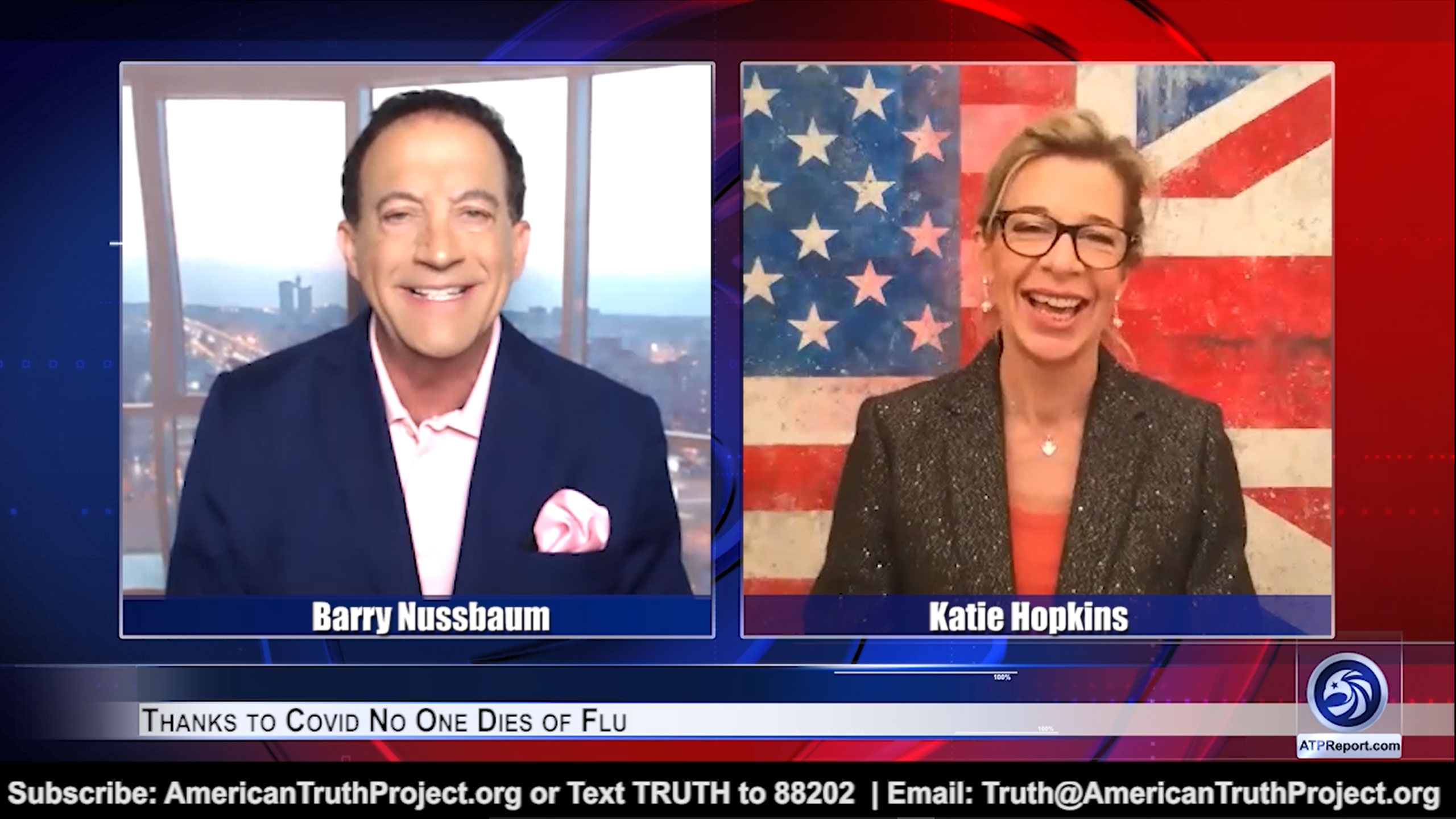 Barry Nussbaum: Hello and welcome to ATP Report. I’m Barry Nussbaum. We are back again with the Katie and Barry show, which includes the delightful, wonderful, brilliant Katie Hopkins all the way from London, England. Hi, Katie.

Katie Hopkins: Hi, lovely Barry. It’s my job this week to remind people to stay in touch with us and for us to be able to speak to them if they’re in America, they can text for free I understand Barry the word TRUTH to 88202.

Barry Nussbaum: Well said. You are subscribed for free, and you’ll get all of the stuff that we produce on your cell phone absolutely free. So, there’s this guy in Britain, Captain Tom.

He’s 100 hundred years old. He has now sadly passed. He was going to raise a few thousand dollars by marching around his garden, and he literally raised thirty what 33 million dollars?

Katie Hopkins: So, he fought in Burma. The sweetest old man, 100 years old. He saw the pandemic in all of this craziness and said, “I’m going to raise some money for the health care system.”

He started off wanting to raise £1000, whatever and ended up with £33,000,000 because he sort of touched the hearts of the nation. But this is where the story goes a bit dark. Sadly, he has passed away.

Now, obviously, no one could die of old age anymore, Barry. People can only die of COVID. Of course, that was the story. It doesn’t matter that he was a 100. Then Boris Johnson did a really bizarre thing. He used the Captain, our authentic love for a very sweet man, and said, “Let’s all stand on our doorsteps again and clap for Captain Tom.”

So, we had the whole nation standing on their doorstep those that aren’t skeptical clapping at the sky Barry once again and they even sent the press bank to film the daughter and the grandchildren clapping. There was something wretched about that from what was a lovely, lovely thing.

Barry Nussbaum: That’s a really great story that got co-opted as many great stories do. Kind of sad when you think about that.

Barry Nussbaum: So, people are driving around here, and maybe there, with their windows rolled up in their cars with masks on. I see them on the road all the time, often alone in their car with their mask on. I wonder if any of them realize they’re cutting down their oxygen content.

To make matters really strange, Katie, Dr. Fauci, our, well, medical expert, I guess. Now wants people, he said, to wear two masks. So why don’t we just get you down to the point where you’re virtually immobile because you can’t get enough oxygen to function, and people are talking about doing it!

Katie Hopkins: I know, Barry, and isn’t it funny. There’s also this sort of virtuous thing, isn’t there. They have these eyeballs that sort of say, look at me I’m so, you can’t say anything else, I’m so virtuous.

I’m in my car even. I call them mask perverts, Barry, because it seems to me a sort of perversion of humanity that you could be in your car. Some people say, well, I have it on because I forgot. How can you forget?

I can wear it for a second without wrestling it off my face. So yes, mask perverts are my new title for it, and I think they deserve our pity, Barry, as opposed to anything else. Just pity.

Barry Nussbaum: I can’t even imagine the health crisis that’s going to be caused when you have to have two masks on. You’re breathing your own exhaled carbon dioxide, and your oxygen level drops, and you’re walking around on the street or in the supermarket not getting enough air. Oh gosh does that sound dumb.

Katie Hopkins: I have a question, actually, Barry. If you have a mask on and you need to sneeze, what do you do?

Barry Nussbaum: Well, I see people in the supermarket, and they pull their mask up, and they sneeze, and then they put their mask back on. So, they’re launching microscopic projectiles. I don’t know how far those things go, but then the mask goes back on. So, then everything is okay.

Barry Nussbaum: So, President Macron in France now says that he’s going to go against his advisers and his scientists on a third lockdown because of, well, the risk to mental health. The economy is collapsing, and they can’t afford any more economic devastation. He’s coming up for election in a year.

Barry Nussbaum: He’s well, diverting away from the public narrative. How is Europe going to deal with Macron?

Katie Hopkins: So interesting, Barry, and this is where I think from a state’s perspective, this is where if you imagine Europe is a load of different American states. So, you have Britain locked down like crazy.

It is illegal to go on holiday—Germany lockdown. Macron has come out and said “No,” and that was the front page of the newspaper ‘Macron de Non.’ They want to make sure he owns that. So, if this goes wrong, they are putting it squarely with him.

I think what’s going on here is a cultural thing that states in America understand. He’s concerned because, in the Netherlands, they had riots recently about the lockdown. He knows the French people aren’t easily pushed into their homes. They are revolutionaries at heart.

I think he’s frightened that they will do the same. He’s frightened of riots, and so he said no to a lockdown. Isn’t that a good thing? That makes me slightly ashamed to be British because the British people can be very easily controlled.

Barry Nussbaum: We’ll see how the rest of Europe reacts with him because, as you said, he’s swimming against the tide, and the tides are getting stronger in the other direction, so we’ll see how people actually relate. So, you’ve got an email from a nurse that you think is a great story. Tell us about that.

Katie Hopkins: Yes, I get a lot of these emails, Barry, because I speak out about my own views. I am not trying to convince anyone else. We agree I’m not a doctor or a scientist, but I just speak about trying to encourage people to live the best life they can.

I have all of these nurses, Barry, emailing, saying, “I can’t release my name or where I work, but we’re empty. We have no one here. I have nothing to do on my shift.” That nurse is bringing in boardgames and wants to play to pass the time, but the media and the government are saying that our hospitals are full.

So, what’s the truth? How dark and big is this lie? I don’t see why nurses would lie about that, but how can they bear working somewhere where they know the public is being lied to?

Barry Nussbaum: You know, you mentioned something a few minutes ago that is sort of a corollary to your current commentary, Katie. Which is that everything is COVID. The hundred-year-old guy that died obviously died of COVID.

I read a statistic the other day that flu deaths in the United States have gone to nil. Nobody dies from the flu anymore, it used to be hundreds of thousands a year, because everything is COVID.

Katie Hopkins: You are so right.

Barry Nussbaum: And like your nurse friend, we’ve got a very close friend here who has been a nurse for, I guess like twenty-five years, and she said that the hospital that she works at, she’s a senior critical care nurse, is virtually empty because elective surgeries are banned, and the beds that are reserved for COVID patients are empty.

They don’t have that much to do while the revenues for the hospital are dropping precipitously. I wonder when any of that’s going to be reported.

Katie Hopkins: So true. You know, that’s the thing. COVID has cured old age because no one dies of old age anymore. They only die of COVID. I happen to have the flu graph here, and it doesn’t matter about the detail. You can see it used to be this high.

Now it’s nothing because somehow seasonal flu got cured by COVID. I don’t think we’re ever going to see the stats for cancer patients. In the UK, if you have cancer or you might have it, you haven’t been treated for a year. The stats on that are going to be inconceivable, I think.

The significance of all of this is that we’ve learned politicians will do anything for power. They will separate you from your elderly relatives with dementia. They will take your children to the point of suicide. They will ignore cancer patients, allow them not to be treated, you know, and a number of other things.

They will send small businesses to the wall if it means they get more power, and that’s a hard thing for us to reconcile with.

Barry Nussbaum: There are studies being done now that are correlating data for the causes of death caused by the COVID reaction federally in the US and across Europe. What I mean by that is cancer patients not getting treated are dying, diabetics not going to get treated are dying.

Suicide rates, people dying, and so on and so on and so on. What I’m reading on a preliminary basis is the ancillary causes of death caused by the reaction to COVID may actually be worse than COVID, but the statistics are not being publicly disseminated.

Katie Hopkins: I think that’s right. I think if you take that macro view and look at it from the point of view of one, we just had a gentleman cut from a tree where he hung himself in a village. He was the local bartender.

Everyone knew him. When they wrote up the hanging and how sad everyone was, they still didn’t write anything about how he found lockdown this, or he had struggled with lockdown, or he’d lost his jobs.

They just made it this lovely gentleman who everybody knew hung himself, and they left it at that, and you think they’re not telling the whole story, even from a level of one or from the macro-level it’s all going to be just shushed away.

Barry Nussbaum: Because it’s not supportive of the approved narrative, and so, as you said, it’s not news.

Katie Hopkins: Thanks, Katie, for coming on today. As usual, you’re fabulous.

Katie Hopkins: Thank all of you out there for tuning in. Remember, send the message TRUTH to 88202. You’ll be signed up for free, and you’ll get all of our content on your phone. For ATP Report, I’m Barry Nussbaum.

Why California is Recalling Gavin Newsom!