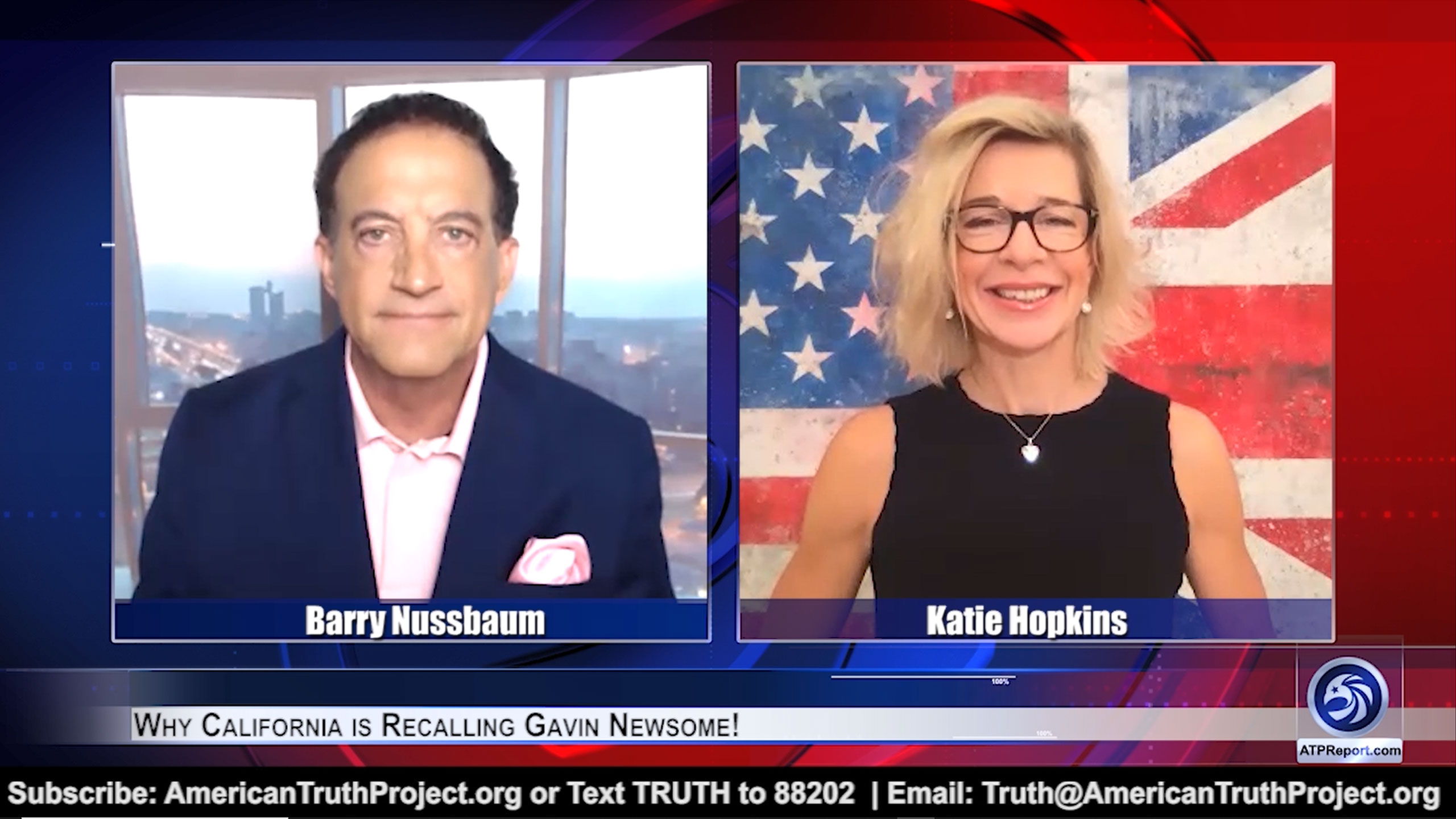 Katie Hopkins: Hi, Barry. It’s good to be back with you guys. I was just saying it’s very, very chilly up here at the moment. The temps have just frozen over for the first time in about three hundred years. So, yeah, we’re probably getting a touch of the cold here in the UK.

Barry Nussbaum: Well, obviously, it proves beyond a shadow of a doubt that global warming is occurring.

Katie Hopkins: Yeah, absolutely. Without a shadow of a doubt. Really, come in and tell me that. Yeah, for sure.

Barry Nussbaum: Of course. So, let’s talk about a warmer place, which is California. As we all know, Barry was there in the state for many, many, many, many years and worked in government with a number of governors.

The current governor looks like he may be headed out. There is a massive recall effort from north to south in the state to recall Gavin Newsom. The law says you have to have a percentage of the people that voted in the last election, which puts the threshold at a million, five votes.

They just got there. But the Secretary of State, who’s a very good friend of Newsom, has made no secret of the fact that he’s going to knock out a lot of those, and his office gets the final say. So, the organizers need an extra two or three hundred thousand signatures to qualify for the ballot. Why do they want to get rid of the guy?

Katie Hopkins: I mean, it’s an incredible thing, as an outsider, but having spent quite a bit of time in California, you know, I just so admire Californians having seen everybody with their recall Newsom petitions. Everybody seems to have a clipboard.

Everybody’s got a petition. When I went to the gun range, there was a petition at the gun range. You know how meticulously everyone organizes these. This is not something done, you know, rough-and-ready.

The address has to be correct. I think I was it looking up, they reckon about eighty-four percent are accepted. So, the total they’ll actually need is about one point eight million. Is that about right, do you think?

Barry Nussbaum: Yeah, exactly. What’s really interesting, as I look at this, as someone who’s been in government there for a very long time, meaning me for years, Newsom has had these policies that are just horrible.

You know, he’s anti-gun rights. He wants to collect them all. He’s pro-welfare. He’s open borders. He doesn’t care how many homeless are on the street unless, of course, God forbid, they’re illegal aliens, in which case they should be housed, clothed, fed, and given medical care for free.

Forget the veterans and so on, on the streets. But what really pushed this over the edge was after he said, “The whole state is locked down, nobody can go out without a mask, no one can go to a restaurant, everybody has to social distance.”

Then he went to the most expensive restaurant in the state of California, invited a bunch of people for his party. They all sat at a private dining table in a private room, hugging, kissing, singing, and getting drunk together—no masks and having a good old time.

When the pictures ended up on social media, he denied it. Until finally, it was irrefutable. It took that to get people angry enough. Not all the horrible policies.

Katie Hopkins: You know, and it’s a strange thing, isn’t it, because I was reading as well, this will be only the fourth gubernatorial recall in the history of the United States of America. I mean, I think that’s humiliating in and of itself.

Surely, I would feel humiliated. But then I think Barry is that correct, that after a recall, there’s still this sort of process to go through. So, if enough Democrats come out and say, “Oh, no, he shouldn’t be recalled.

We don’t want to elect someone else.” He will still survive. I guess the question is, will he? If he is recalled, do you think he will survive it or not?

Barry Nussbaum: Well, coincidentally, I was in the last administration in California where my boss got recalled, Gray Davis.

Barry Nussbaum: So, the person that’s going to, I would guess you say, replace the guy on the way out, becomes the guy on the way in, and that’s what happened when Arnold Schwarzenegger took Gray Davis’s place and became my new boss.

In California specifically, right now within the state, there’s a lot of Democrats that have just had it with Gavin, and they are jumping ship. So, they may put up their own candidate to replace him, and if that happens, he’s toast.

Jared Kushner, who is now the former White House Senior Adviser to the United States President, and his deputy, Ivy Berkowitz, have been nominated for the Nobel Peace Prize.

They were nominated, actually by a professor emeritus at Harvard University, Alan Dershowitz, who has that authority through his affiliation with Harvard. The nomination is for the Abraham Peace Accords, which literally and I can’t emphasize enough, are the most important dramatic news to come out of the Middle East in maybe half a century.

If there was ever anyone that deserved the prize, it’s Jared Kushner. Now, what’s curious is there are very low, if any, standards to nominate somebody. Meaning you can have somebody, well, like Yasser Arafat, a murdering thug, terrorist for his entire life, and he got a Nobel Peace Prize.

Jared competes in this go-round with one of the most undeserving of all-time climate activists, Gretta Thunberg. I don’t even know if she’s 20 yet, but she’s a child who runs around and claims that the earth will end in about 15 minutes from climate change.

Meanwhile, Katie is freezing her tushy off with the coldest winter in London in three hundred years.

Katie Hopkins: Don’t even get me started on Gretta Thunberg. She was the one that led the strike, the school strikes here. Well, across Europe, actually. On a Friday afternoon, kids would decide I’m going on strike. It was supposed to be for the climate, but they just basically had an afternoon off.

I was very clear with my children, don’t think that you are going on strike for any reason. While I’m paying school fees, you’ll be in class. But Jared Kushner, it’s a strange one when we don’t get a feel for him. I fear also, Barry, that I think globally, or at least in the mainstream media, those peace accords, and the negotiation and just how historical they were was completely unreported.

It was almost as if they didn’t happen. I mean, I might be being ignorant, but it felt like they were kind of brushed under the carpet.

Barry Nussbaum: Very well said, Katie. It’s the biggest, most important news in the Middle East, well, since the forties, and it was as if nothing had occurred.

Why? Because Jared Kushner is radioactive because of his well, father-in-law. You know that Trump guy. As a result, years of work has created a completely changed Middle East. Where the Sunni states, the Sunni Arab states have embraced Israel, they’re opening embassies.

They’ve got trade delegations. They’ve got tourism going back and forth. They’re working on research and development of all kinds of agricultural and health products. They’re cooperative on COVID. It never makes the press over here. Is anybody in the UK reporting it?

Katie Hopkins: No, absolutely not. Actually, I had to kind of be proactive and lookout for that information. I would be in touch with my Israeli friends, you know, people in Tel Aviv who’d be celebrating.

Then there was this kind of looking around, trying to find it in the news everywhere else. Even though we have a massive Jewish community here, my Jewish friends, same in Paris, it felt like it was just completely pushed away because it was the wrong person that negotiated the peace.

What a crazy idea that is. One of the things I also wanted to talk about, Barry, because I read about it and I was like, what is this? This report of a water supply being contaminated in Florida.

I read that just after the game between, I think it was Tampa. Forgive me, my American football knowledge is very poor. There was a pollution of the Floridian water supply or at least a sort of an attempt to pollute the water supply.

Barry Nussbaum: Yeah, it literally started by somebody hacked into a water purification plant in Oldsmar, Florida. Had it not been detected it could have made hundreds of thousands of people sick and probably killed ten thousand or more by altering the mixture of what gets put in the water to kill the germs.

It turns out they use the chemical sodium hydroxide, which is basically a lye in small quantities to kill stuff in the water. Now, this opens up a whole lot of important discussions. It’s clearly attempted terrorism. Where the bomb was set to go off, and they caught it. It could have been catastrophic.

It leads us to know and understand that with Internet access, you know, a kid could be in the basement two miles away or in Afghanistan with an Internet hookup and I guess the right hacker knowledge, can kill massive numbers of people, and never get out of your pajamas.

If you know what you’re doing. It may seem that the preppers, as goofy as some of them are, maybe on the right track, have food and water at home just in case.

Some places I would never have thought of. You know, people moving to the very south of Mexico where they could ensure that they had their own generator and, crucially, their own ability to access water. You know, there’s a part of me that feels that that’s far-fetched and then you hear a story like this, and you go, you know what?

I’m not sure these people are wrong. I was with Candace and her husband the other day, Candace Owens, and where they are planning on moving to next, which shall remain undisclosed they have a kind of bunker setup going on, and I don’t think they were alone in that.

Barry Nussbaum: Scary times, my friend. Scary times. Thanks for coming on today, Katie. We sure appreciate it. For all of you out there in ATP land, if you haven’t subscribed to our text message alert system, I want to remind you, to text the word TRUTH to 88202.

You’ll be signed up for free. You’ll get all of our stuff, including everything Katie and Barry do, absolutely for free on your cell phone. Thanks for coming on today, Katie, and thank you out there for joining us. I’m Barry Nussbaum.

Thanks to Covid No One Dies of Flu