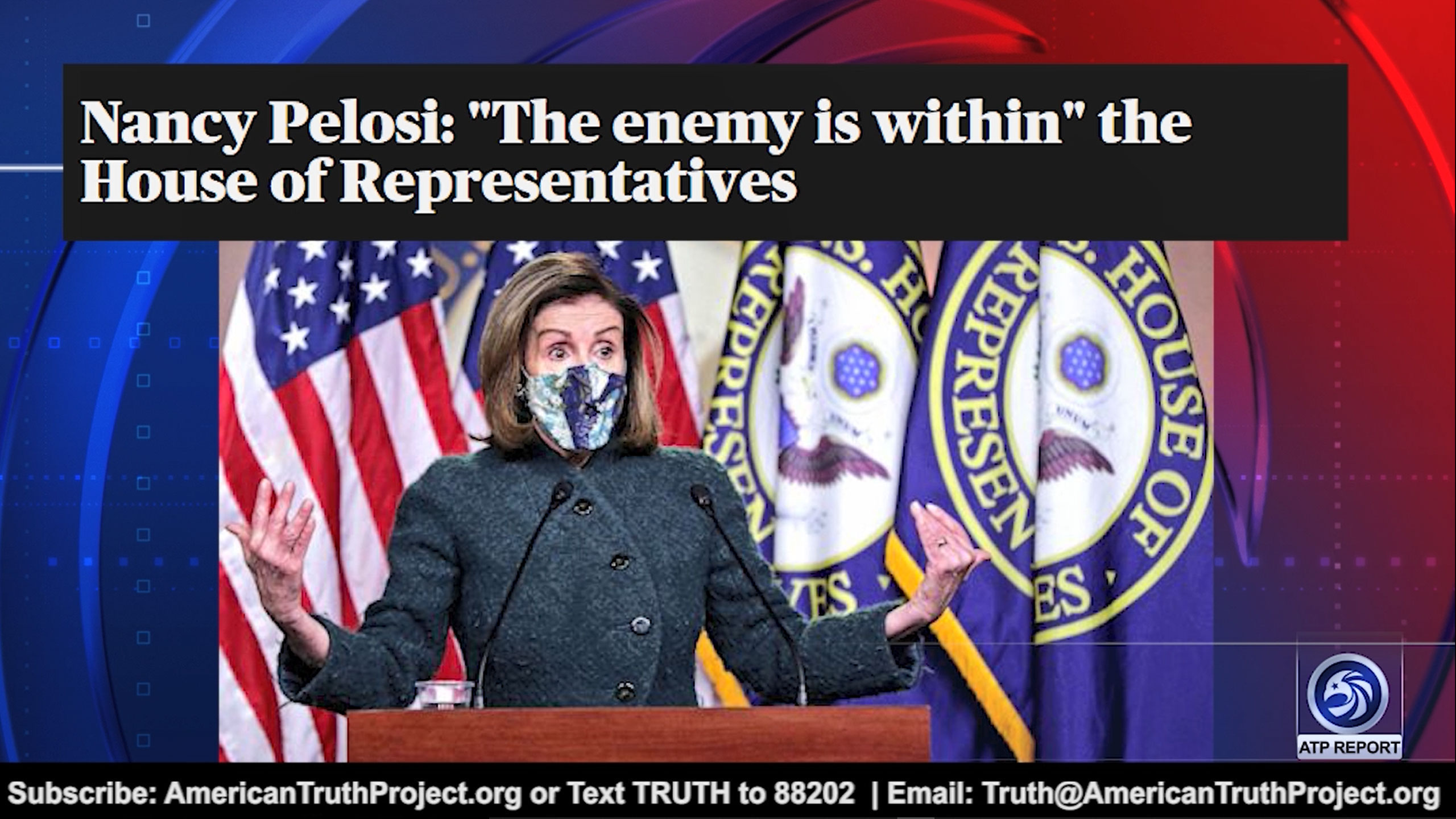 Katie Hopkins: Hello, Barry, and thank you for that very kind introduction. It’s good to see you again and good to be back with our ATP family here online.

Barry Nussbaum: Let’s talk about the well, the gross news out of D.C. Apparently, the National Guard, which has been sent from governors across the country at the request of our federal executives, is going to deploy and stay there for at least another month to protect Washington, D.C. from well, I’m not exactly sure what.

The expense is dramatic. The troops were treated horribly. They were sleeping on the floor. They didn’t have restroom facilities. They were being grossly disrespected. Then, Governor Pritzker, out of Illinois, talks about the dark forces of racism and white supremacy and so on. What’s your take on that?

Katie Hopkins: You know, your heart kind of goes out to the National Guard guys having stayed with or having had them stay in the same hotel as I was in back in January. This was January 6th.

They were already questioning what they were doing there. This is now going to be; they’re going to be there to March. When you start hearing that the explanation for why they’re there is misinformation or the dark forces of racism, how is that quantifiable? And how on earth can they know when they’re going home?

Barry Nussbaum: I’m stupefied. You know, to top it off, when Nancy Pelosi, who’s the speaker of the House, who’s third in line to be President of the United States, God forbid, is asked about it, she talks about the fact that the enemy that they’re protecting against is, “Within the House of Representatives.”

Oh, my God, what does that mean? If it means what I think it means, maybe the fence ought to go right down the center aisle between the Democrat side and the Republican side, so Republicans don’t jump the Democrats and start killing them wholesale. What are you talking about?

Katie Hopkins: Right. And that woman loves the fence, as you know, because she has one all the way around her home in order that she’s protected because we all know it’s always one rule for thee and not for me. You definitely get that sense Barry, don’t you?

At the moment, the Democrats believe the Republicans, all of them, apart from maybe the 11 that have crossed over to vote with Democrats on various issues, that they are the enemy. You know, what happened to the talk of unity?

Barry Nussbaum: Well, it’s going to get worse with what I’m about to ask you. The former Police Chief of the U.S. Capital quit after the disaster on January, whenever it was the sixth, and the new acting chief now wants permanent fencing and enhanced security to keep people away from the Capital.

You know, the people’s House. Except this new Chief Pittman does not want anybody going to the Capital. Boy, have things changed in our free democratically elected Capital.

Katie Hopkins: That’s so right, Barry, and you know, I’m the foreigner here, as we know, but one of the things that always struck me when you get to D.C. is what a splendid Capital it is and how open of a place that it was. The Mall, the monuments, the Capitol.

To think that’s going to be taken away over something that doesn’t seem to be quite as it seemed in terms of what happened on the 6th that feels like a national tragedy, if not an international one.

Barry Nussbaum: Yeah, I’m extremely sad about it. Some of the things coming out of Washington, like that statement that the enemy is within the building, within the House of Representatives, is scandalous.

You are not allowed to disrespect your fellow members of Congress. There are ethical rules about it. She could literally be sanctioned for saying it, but the Dems control the House, so there will be no sanctions. So, check this out.

The other day, there was a vote on spending our money, taxpayer money on illegal aliens instead of U.S. Citizens, as part of this bailout. In other words, let me take your money, Mister American taxpayer, and give it to illegals that have broken into the country.

We’re going to do that instead of taking care of our people that, well, you know, are living on the street, have no food, no lodging, no medical care. Many of them are veterans.

Katie Hopkins: That’s right, and it makes you wonder, doesn’t it? How long that’s going to hold? How long is it before the 42 that we’re in favor of handing out your money to illegals become 125, become 220, and then now the majority?

It has your money. It’s your money they’re going to hand out to illegals. And just as with the ferryboats that we have bringing migrants across the med, what does that do for others? It incentivizes them to come.

Barry Nussbaum: Oh, boy, it sure does, you give somebody a warm place to sleep, a warm meal on the table, and a nice stipend every month they’ll travel all over the world. Why?

Katie Hopkins: And we’ve seen it here, Barry. You know, the migrants don’t just take that money and go do something with it. They are showing their friends. You know, it’s one of the videos we see all the time is of them going, look, I got this hotel room. Look, I got this free money. Look, I got this health care. They advertise your country in the worst possible way.

Barry Nussbaum: Well, my country is in the middle of violence, the likes of which it has not seen in peacetime. Chicago is breaking records on riots and murder, as are almost every major U.S. city. And yet. And yet. We’re all locked down.

They’re calling for more gun control, for example, in Chicago, which has the strongest gun control laws in the United States. They advertise when you drive around Chicago, gun-free zone, entering a gun-free area, this school is gun-free.

You know, at some point, whoever orders those signs is going to grow a brain and realize people carrying guns don’t throw them away or lock them up on the way to commit a crime because the sign says no guns allowed.

Katie Hopkins: Governors seem to always want to have an excuse. They don’t take accountability for these figures, just like our mayor in London never takes accountability. And their excuse is, “Oh, it’s a lockdown.”

But when you actually analyze these statistics in the first lockdown, crime dropped. But after the George Floyd riots and the pushback against the police. You know, to defund the police. That’s when these numbers really went sky high.

Barry Nussbaum: And they don’t change the story because nobody calls them on it.

Barry Nussbaum: So, you know, it used to be that people were killing each other in Chicago because the gun laws weren’t strict enough. Well, they’ve got the strictest gun laws, so that, after a while, got stupid. Then it was because of Black Lives Matter and no rights to protest.

Well, they protested to the point of burning down the city. Every weekend it seems they’re breaking records on killing each other with weapons that are illegal in a place that doesn’t even allow weapons.

So, you can’t pass more gun control laws. They’ve already banned the guns, and it’s like a war zone there.

Katie Hopkins: Yeah, and I’m guessing Barry, you probably know people who are moving out of New York or moving out of these cities.

Barry Nussbaum: If I lived there, I wouldn’t live there anymore because it’s just horribly unsafe. That’s my take.

Thanks, Katie, for coming on today, and thank you out there in ATP Land. I want to remind you if you haven’t subscribed to our text message alert system, that gets you all of our content absolutely free on your cell phone. Please text the word TRUTH to 88202.

You’ll get all of our stuff on the cell phone absolutely free. You’ll see lots of Katie and Barry and all of our other content. For ATP Report, I’m Barry Nussbaum.

Thanks to Covid No One Dies of Flu