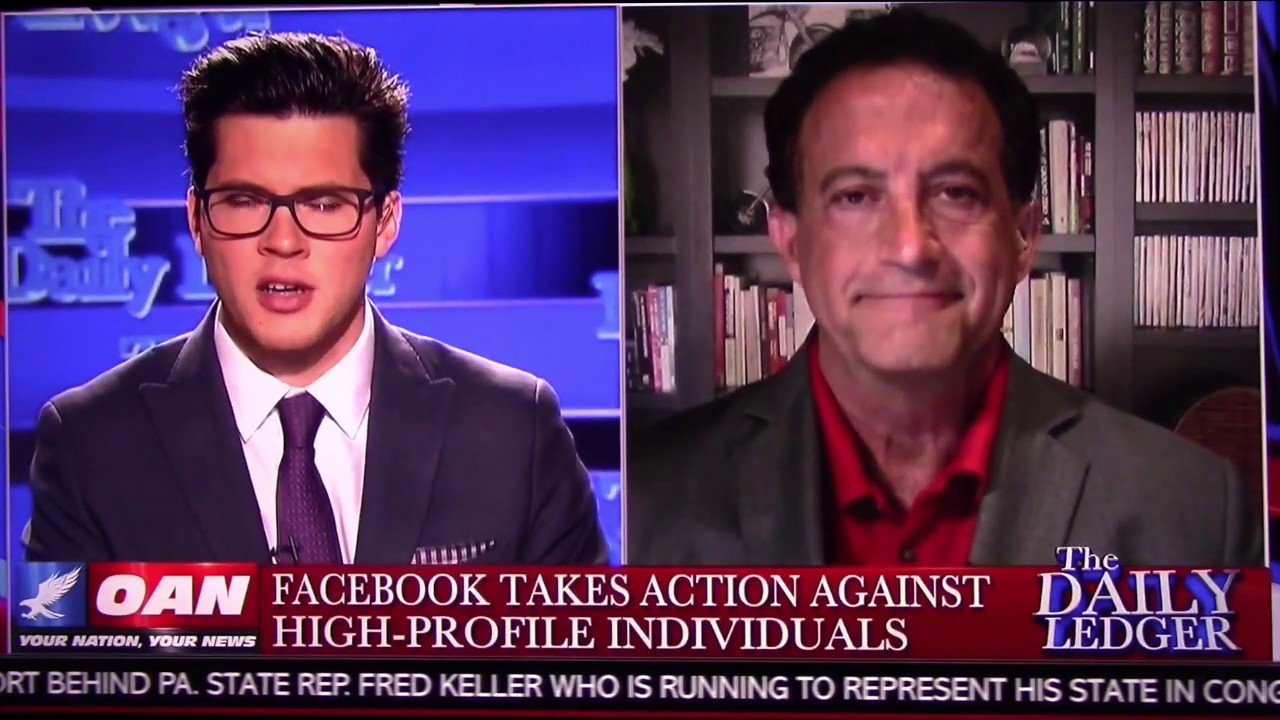 Alex Salvi: Page 6 now Facebook announced on Thursday it’s taking action against several high-profile individuals most of which were prominent conservatives calling them dangerous to have on the platform.

Reporter: Facebook said Nation of Islam leader Louis Farrakhan referred to Jews as termites and called their religion dirty and its followers liars cheaters thieves leading to his ban.

Alex Salvi: Another one of the figures who is banned from the platforms as you just heard is the hateful preacher and founder of the group Nation of Islam Louis Farrakhan. Farrakhan isn’t a provocateur or a conspiracy theorist. He’s an outspoken homophobe, bigot, anti-Semite, you name it. You may remember his clip which made headlines last year. So, when they talk about Farrakhan.

Louis Farrahkan: Call me I hater. You know what they do. Call me an anti-Semite. Stop it. I’m anti-termite.

Alex Salvi: To help us break down the latest crackdown on social media platforms. Want to bring in the founder of the American Truth Project and Daily Ledger contributor Barry Nussbaum. Barry thank you very much for joining us tonight. So, as we just heard a lot of those are far right figures of conservative figures for that matter. Lewis Farrakhan he’s not he’s his own little brand. But what do you take on the whole idea of censorship in general being taken by Facebook and Instagram Yesterday?

Barry Nussbaum: The press release, Alex is wonderful and it’s a real feel good. But when you dig underneath it’s a lie. Louis Farrakhan is the most productive purveyor of hatred probably in the last 50 years in America who has a public platform. This is a guy that hates almost every other group. There are white people, gay people, very religious people, the government, the United States, and of course his favorite enemy the Jewish people and the state of Israel. This is a guy filled with so much evil and hatred. He should have been banned. The day Facebook went live the other people lumped in, as far as this group ban are people, usually conservatives, that shine a light on the hatred of people like Farrakhan. They don’t belong in the ban category. They should be applauded as free speech advocates trying to protect all of us from the purveyors of hate. I don’t believe that Facebook should be applauded. I think it’s disgusting. Farrakhan should never have been on the platform and many of the people now banned should still be there.

Alex Salvi: I think that’s a really good point to bring up too because the reasoning for these individuals being banned were not uniform. In fact, they didn’t even get to actual reasons for why they were banned. I mean Alex Jones is a conspiracy theorist. I get that he puts out fake news. Laura bloomer I get that she’s controversial, but Louis Farrakhan actually calls essentially for genocide. I mean we play that clip saying that Jewish people are no different than termites. So that is a little bit where I kind of start getting into the weeds a little bit. As soon as you start calling for violence, maybe that is when I start calling for censorship. But when it comes to actual just kind of putting out vague messages, I think it’s up to the person the viewer to really make that decision. But the Washington Post when they first broke this story, they defined Louis Farrakhan as a far-right leader. And I think this is an important point to bring up because the Economist a couple of weeks ago called Ben Shapiro an all right member and I think there’s something to be said that there is a fundamental lack of understanding of what the far right is what the all right is whatever it may be. And I think that actually causes maybe some harmful dialogues to take place if you can actually identify it. Do you agree with this idea that there is a lack of understanding of what the far right is what the neo-Nazis are and all that?

Barry Nussbaum: Oh, there’s no question the Washington Post historically is one of the most prominent high reputation investigative journalists’ group in the history of American journalism. Unfortunately, they don’t just report the news anymore they make the news. For example, to call for a kind of right wing is insane. He hates almost everybody. That’s not right wing. That’s not even on this planet. The man literally dispenses evil on a daily basis. Ben Shapiro is a libertarian conservative who happens to be a religious Orthodox Jew who believes very strongly in the Constitution and its amendments. And that’s what he talks about constantly. You can’t lump him into that same barrel. Laura Bloomer is an investigative journalist who goes out and shines a light on this evil, evil like Keith Ellison, Rashida Tlieb, Ilhan Omar, Linda Sarsour. She tells the truth and puts a video camera on them and Facebook labels her as evil and should be banned. It’s ridiculous. I think what’s happened is Facebook is placating its progressive supporters by saying look, yeah everyone agrees we should have banned Farrakhan a long time ago. But while we’re at it we’re going to knock off everybody on the right and that’s literally what they’ve done. Milo Yiannoopolous, Laura Loomer, and many others don’t deserve it. I’m not going to defend Alex Jones because like you said Alex, he tends to make things up to promote himself which I don’t approve of. But at the same time people ought to be able to tell the truth about other people that literally are dispensing evil daily and that’s why Laura belongs there and so does Milo.

Alex Salvi: Yeah and I heard a lot of people yesterday talking about Louis Farrakhan. If he’s being if he’s a far-right leader, why is he praised by the Women’s March so much. We saw Tamika Mallory come out and quite literate she was asked on the spot do you condemn his language. And she refused to do so while on the view. So, I did. I just think it’s something to keep in mind going forward kind of separating what these two evils are. Barry Nussbaum, thank you very much for joining us tonight.