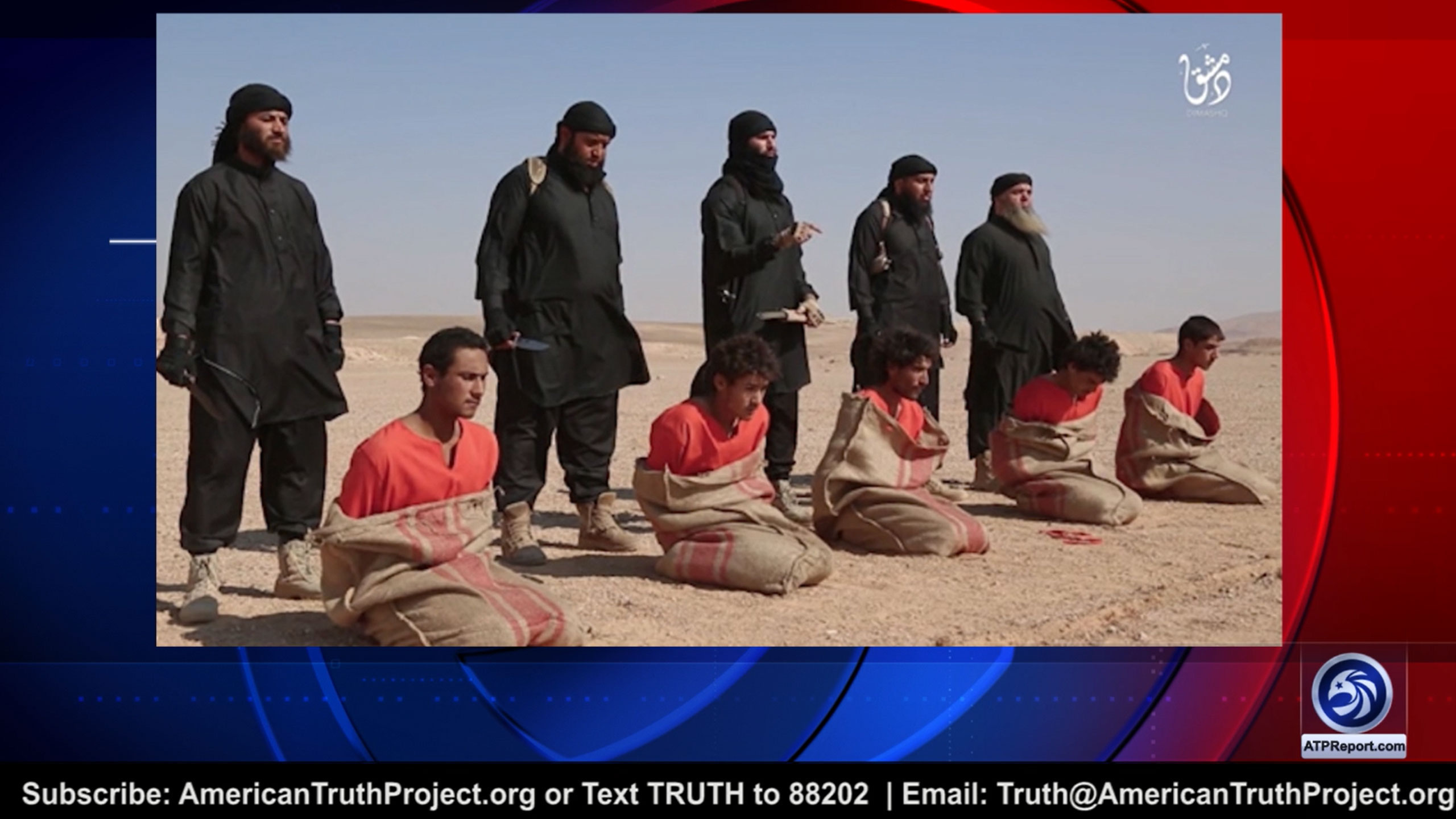 Barry Nussbaum: Hello, and welcome to ATP Report. I’m Barry Nussbaum. We have been doing a number of segments recently with Clare Lopez vice president at the Center for Security Policy in Washington, DC. Clare, thanks for coming back.

Clare Lopez: Thank you, Barry, good to be with you again.

Barry Nussbaum: So, we’ve been talking about the death of ISIS founder and leader al-Baghdadi and its implications. I’d like to continue that discussion with a rather obvious question that no one seems to be asking. So that’s what ATP is here for. Al-Baghdadi was found and killed, hiding very close to Turkey in northern Syria. The Turks were, if not protecting him, then at least they knew he was there. Who was protecting him? It reminds me of Osama bin Laden in Pakistan, just a few blocks from the head of the Pakistani equivalent of West Point. And Pakistan, after we found him and killed him, said, “Oh, we didn’t know he was there.” Obviously, no one believed the Pakistani military, their intelligence, or their government. Tell me who was hiding al-Baghdadi in northern Syria?

Clare Lopez: Well, as you say, Barry, exactly the location where he was found, this compound that is now a pile of rubble is quite close to the Syrian Turkish border. That region is called Idlib Province. And its sort of in the northwestern part of what used to be called Syria. But as you say, very close to the Turkish border. It is dominated in Idlib Province, primarily by al-Qaida and Islamic State militias and affiliates, whatever was left of those militias after the last eight years of war. So, they were protecting him, certainly, these jihadist al-Qaida Islamic State-affiliated militias. But hard to accept that the Turkish government didn’t know anything about this. Of course, we know that in the early years of the civil war uprising against Bashar al-Assad in Damascus, 2011, 12 13, the Turkish regime permitted its territory to be used as a thoroughfare for jihadis coming from all over the world, headed to the Syrian battlefield.

Barry Nussbaum: So, is it fair to say that they weren’t incompetent, but rather it’s obvious they knew about it, and that makes them complicit in hiding the most wanted terrorist, at least in that part of the world?

Clare Lopez: It could be. We don’t know that for sure, but it certainly could be.

Barry Nussbaum: So, let’s talk about the man himself. We know, as we talked about, al-Baghdadi was not his real name. It was a nom de guerre. He had a different name. What is the significance of the name he took when he went from religious, educated scholar to head of the most vicious jihadi movement in the Middle East? What does the name mean?

Clare Lopez: Well, really important question, Barry. So, Abu Bakr was the name of the first caliph who followed after Mohammed, according to the history that’s come down to us. And his job after the death of Mohammed was to round up all the stray tribes on the Arabian Peninsula that thought, “The old man is gone. We can go do whatever we want now.” Well, it fell to Abu Bakr, to round them all up again, and forced them back under the black flag of Islam. And he fought what’s called the Ridda wars or the wars of apostasy. In other words, those tribes had been conquered, had become Islamic, and they were trying to slip away. So, this Abu Bakr al-Baghdadi took that name, Abu Bakr, as his nom de guerre, I think is significant in that he saw himself likewise as a major Islamic reformer, is the only thing we can call him in that regard.

Barry Nussbaum: Well, please don’t use the word reformer in the sense of to make it modern and compatible with other religions. If anything, it’s the opposite. He’s trying to reform Islam back to the beginning, meaning conquer by the book or by the sword. And the brutality of this organization was just horrific. All right. Nothing’s been seen like it since World War II. The American public has a fair understanding of the brutality of this group, largely by their own hand. They had video cameras on display for the brutal beheadings of countless members of Western societies that they’d captured Christians especially, and apostate Muslims who didn’t want to follow his leadership and his strict Islamic Jihad mentality. In specific, there’s been a lot of talk lately about the murder of Kayla Mueller, the American aid worker that was killed in Syria a few years ago. Tell us and educate our listening audience today, if you can. What is the responsibility of these Islamic warriors when they capture somebody? What are they supposed to do with non-Muslim captives?

Clare Lopez: Well, see here is the point about the name that Abu Bakr took and also the importance of his education as an Islamic scholar of the highest ranks. He and those around him who formed the Islamic State knew their doctrine, law, and scripture very, very well. And what they did to captives to those they targeted was absolutely brutal, cruel, horrific by any definition of us here in the West in a Judeo-Christian surrounding. But what they did absolutely had foundation in the doctrine, the law, and the scripture of Islam. All of that, the beheadings, the amputations, the floggings, the crucifixions, all of that has its foundation in orthodox authoritative Islam. And that’s what we have to understand. It has never stopped.

Barry Nussbaum: Right. So, the Geneva Conventions, which we used to hear about a lot, talk about the responsibility of the captive or the captor of the captive, that they’re to be treated humanely. They’re to be given aid. They’re to be given food and water and access to Red Cross or Red Crescent visitations to make sure they’re being held in humane conditions. That was a very large change in warfare post the tragedies of the world wars in the last century. I think what you’re saying is al Baghdadi jumped backward a thousand years and said all of that is irrelevant because I am literally going to enforce the way it used to be in the good old days where we tortured, maimed and brutally executed anybody that didn’t agree with us. Is that a fair statement?

Clare Lopez: Well, sort of. The thing is that the Geneva Conventions are Western. It is absolutely and utterly irrelevant to Islam and always has been, what anyone else does or says or what rules we follow. What matters is the continuum of Islamic doctrine, law, and scripture unbroken. It’s not going backward. It’s a continuum that has never been broken from the time of Mohammed as followed by his faithful, devout, practicing Muslim followers to the present day. So, Abu Bakar al-Baghdadi was not jumping backward. He was simply implementing the unbroken continuum in faithful, devout obedience to Islamic doctrine, law, and scripture, as all devout Muslims are obligated to do.

Barry Nussbaum: You know what really bothers me when you say this is the Western press seems to think that the treatment of their captives and I’m referring to the horrors that you described, and everybody is well aware of that perpetrated under al-Baghdadi’s leadership are some sort of weird, bizarre cult anomaly. And what you’re saying is, “No, he’s following the scripture.” He’s not some weird guy with a cult in the desert-like Charles Manson rejecting society around him. Here’s a religious, highly educated scholar saying, we’re going to do it the way we’re supposed to do it, which is believe and follow or you are going to have the most horrific end to your life we can possibly create for you. And as a result, scare other people into not opposing us and eventually supporting us. It’s a horror story, and I hope people listen to Clare today. Thanks for joining us on ATP Report. Remember, you can always text the word truth, T-R-U-T-H, to 88202 on your cell phone. You’ll be automatically subscribed to all of our videos, daily postings, and articles like what we’re doing here today. And it’s always free for ATP Report. I’m Barry Nussbaum.

ISIS Founder Who Killed Thousands Called A Scholar By WAPO