The Best Possible Security for Liberties 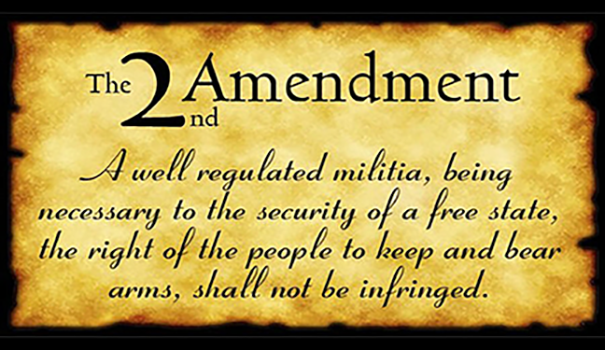 A Large Body of People Who Keep and Bear Arms

Americans have a lot of guns. So of course, America also has a lot of gunfire deaths. And then to solve that problem in turn, some people want to restrict, or even ban guns from the hands of ordinary Americans. To understand why that is a very bad idea, we need to look back in time, to explain why guns are part of America.

America is a nation that aspires to freedom. What that means is that America recognizes that people have natural Rights. Natural Rights is a concept that was embedded into our founding as a nation. On July 4, 1776, our founders in Congress signed “The unanimous Declaration of the thirteen united States of America.” That document clarified that people:

“are endowed by their Creator with certain unalienable Rights, that among these are Life, Liberty and the pursuit of Happiness.”

“Unalienable” means that these Rights are natural, not “alien.” We are born with them. These natural Rights are not granted to us by the benevolence of governments. Instead, God, the “Creator,” endows each of us with them at the time that we each become a living human.

There are other such natural Rights. But these are the three big ones. We have the right to live; to live freely; and to try to find our own ways to live happily, as best we can.

Obviously, governments can and do restrict such Rights from some of us at times. There are also many tyrannical foreign forces and criminal thugs who will try to subvert our Rights, by war, invasion, piracy, robbery, extortion, and more. So to collectively defend our Rights, we consent to be ruled fairly under law. As the Declaration went on to explain this “self-evident” truth,

“That to secure these rights, Governments are instituted among Men, deriving their just powers from the consent of the governed.”

Americans on the Left might seem reasonable to ask, “So, why cannot gun control simply be one of these laws by consent, to protect our natural Right to life from people who might shoot us?” Being governed always brings tradeoffs. But a good government avoids potential grave risks that might most hinder our Rights.

So what are those most grave risks? The Declaration asserted that when a government becomes despotic toward the people,

“it is their right, it is their duty, to throw off such Government, and to provide new Guards for their future security.”

So in the view of the founders, it was clear that the biggest risk Americans face is from a government that would turn despotic. The people must always remain capable of guarding their own natural Rights, against despotism.

The Right to Life implies a right to self-defense. People must be able to defend themselves against bears, wolves, and robbers. But more importantly, the founders were focused on defense from a much higher threat—that of a despotic government.

The fact of that higher threat becomes quite clear, by simply reading the Second Amendment to the Constitution of the United States of America, written a decade after the Declaration of Independence:

“A well regulated Militia, being necessary to the security of a free State, the right of the people to keep and bear Arms, shall not be infringed.”

But beyond that simple reading, we actually have detailed analysis of what the founders had in mind about it. In 1787-88, three of the founders wrote a series of essays, under the pseudonym Publius. These were published in New York newspapers, to gather public support for the new Constitution that they had drafted. Each essay explained the reasoning behind articles in that Constitution. The collection of essays came to be known as The Federalist Papers.

Two of those papers specifically explained the reasons for the Second Amendment.

First, in Federalist Paper No. 29, Alexander Hamilton explained the intent of the Second Amendment, as defensive against any violent federal infringement upon the liberties and other rights of Americans:

"If circumstances should at any time oblige the government to form an army of any magnitude that army can never be formidable to the liberties of the people while there is a large body of citizens, little, if at all, inferior to them in discipline and the use of arms, who stand ready to defend their own rights and those of their fellow-citizens. This appears to me the only substitute that can be devised for a standing army, and the best possible security against it, if it should exist."

Hamilton clearly understood that the key thing that protects the liberties of the people from the armed federal government is the fact that many of us people hold many guns. If Americans are disciplined, trained, and organized, we stand as the “best possible security against” a federal force of despotism.

In Federalist Paper No. 46, James Madison went on to explain how an overwhelming force of the people bearing arms ensures their liberty:

“The highest number to which, according to the best computation, a standing army can be carried in any country, does not exceed one hundredth part of the whole number of souls; or one twenty-fifth part of the number able to bear arms. This proportion would not yield, in the United States, an army of more than twenty-five or thirty thousand men. To these would be opposed a militia amounting to near half a million of citizens with arms in their hands, officered by men chosen from among themselves, fighting for their common liberties, and united and conducted by governments possessing their affections and confidence.”

Madison then made the precise point that being armed is an advantage “which the Americans possess over the people of almost every other nation.” And, “in the several kingdoms of Europe…, the governments are afraid to trust the people with arms.”

When my motherland of Iran went through its revolution in 1979, the government there was also afraid to trust the people with arms. And so without guns in the hands of our people, the hostile Islamic Movement seized the guns of the state. Then they killed their rivals and opponents and imposed Islamic Law.

In America, if we the people do not guard our right to our defensive arms, that despotism can also seize power here. Our founders knew it very clearly over two centuries ago. Our best security for our natural liberties will always be for us Americans to remain a large body of people who keep and bear arms.