California Mosque’s Imam Calls for Mass Murder of All Jews 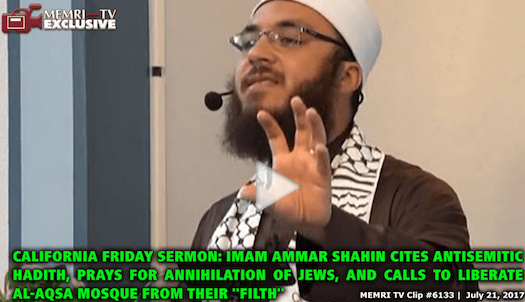 On July 21, Egyptian-born American preacher Ammar Shahin delivered a Friday sermon at the Islamic Center of Davis where he serves as Imam. In it he cited an antisemitic hadith, according to which the Muslims would fight the Jews on Judgment Day, and prayed to Allah to “liberate the Al-Aqsa Mosque from the filth of the Jews” and to “annihilate them down to the very last one,” not sparing any of them. “Oh Allah, make this happen by our hands. Let us play a part in this,” …

This religious leader is calling for mass murder of all Jews everywhere in the world.

Why is he still in the United States?

By the way, his words are not a secret. His mosque posts his sermons on Youtube so they can be seen all over the world!