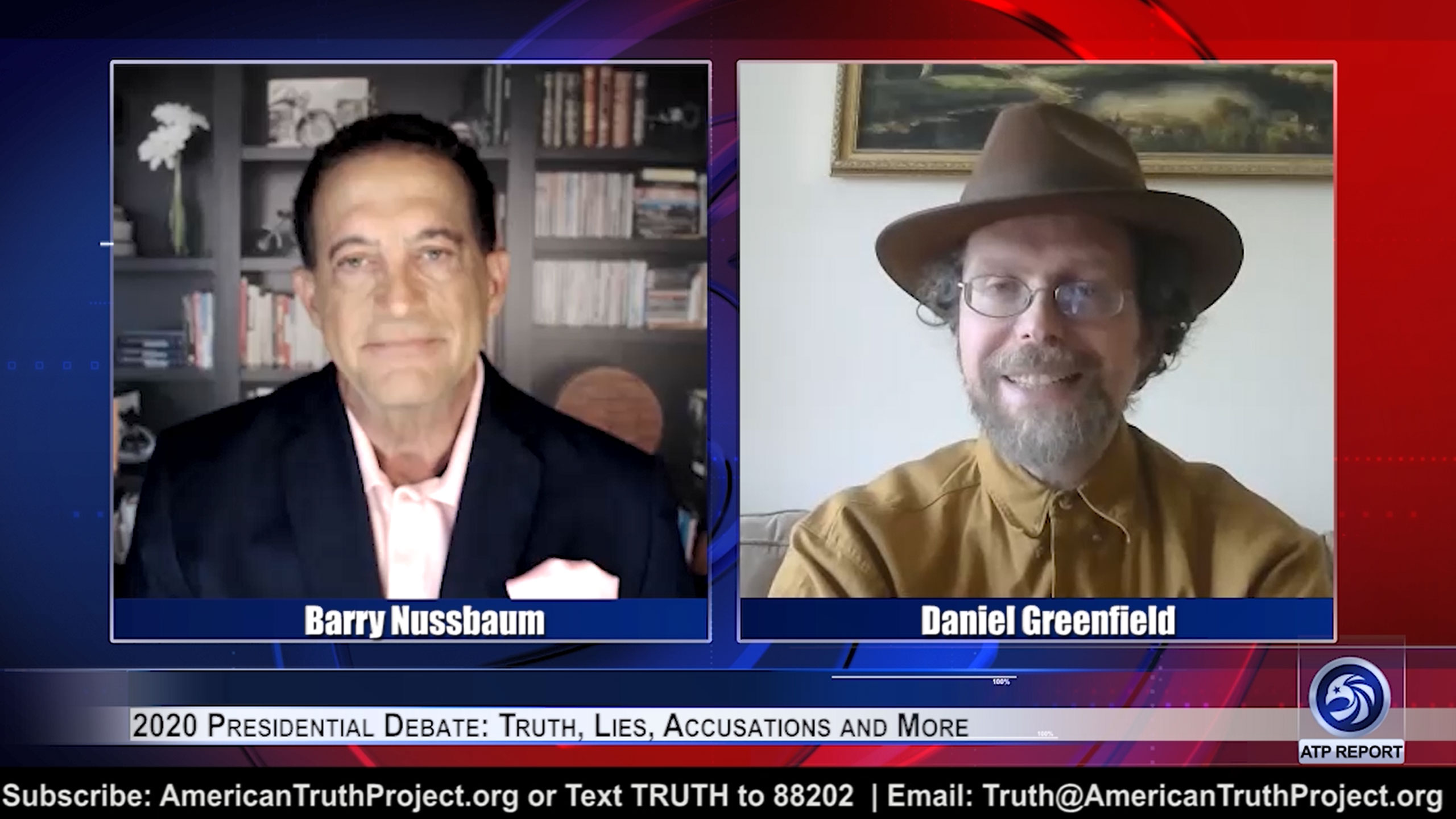 Barry Nussbaum: Welcome to ATP Report. I’m Barry Nussbaum. With just a few days to go before the election, the final debate has become critically important. We have a very special guest with us today to help analyze what happened in the exchanges between President Trump and former Vice President Joe Biden. Daniel Greenfield is here. As you probably know, he is the Shillman Fellow at the David Horowitz Freedom Center. He’s an author. He’s a political commentator extraordinaire, and we’re very happy to have him back with us. Welcome, Daniel.

Daniel Greenfield: Thank you, it’s a pleasure to be back.

Barry Nussbaum: All right, let’s kick this off with our big expert. The polling shows that COVID seems to be trending as the number one issue in the campaign. Joe Biden pushed hard on Trump’s failure to respond, as he put it, and blamed all two hundred thousand people who have died on President Trump in some very emotional look into the camera moments. Is that a fair statement that Biden blames all that on Trump, and is his plan different? I mean, Trump shut down China, and some people say he might have saved as many as two million lives. What are your thoughts?

Daniel Greenfield: Biden doesn’t actually have a plan. He keeps emphasizing wearing masks as if that’s a solution. Mind you. His own party has repeatedly backed huge mass rallies with large numbers of people, whether it’s the 50,000 Sharpton rally in D.C., the Black Lives Matter riots across America, and the Women’s March, which are obviously blatantly in defiance of these same orders that he’s actually proposing. His party has not produced any kind of plan. He kept mumbling something about contact tracing. He has nothing to offer there.

Now, as far as who’s to blame for the death toll. We can go back and forth as to whether the virus could have been kept out of America. It does seem as if it was earlier than the official numbers have it, which would suggest that shutting down, not shutting down, might not have made that much of a difference. The bottom line is, a lot of people also came out of Europe. The shutdown should have been there. This is an area where, again, New York authorities fundamentally failed. Governor Cuomo early on promised to track down the first woman who was infected. He failed to do basic contact tracing there.

He’s got his best seller book now, which he boasts is number 7 on the New York Times bestseller list. Meanwhile, you’ve got a death toll of tens of thousands in New York and the second virus resurgence, which he is trying to blame on religious Jews, but that’s deeply dishonest. The bottom line is, when you look at the death toll, much of it is urban.

Much of it is concentrated in rural-urban areas in blue states. Only later, it took months and months and months for it to actually make its way to more rural areas. These were failures that happened in Democratic states, and in some cases, these were absolutely unforeseen failures. For example, Cuomo, Governor Whitmer, Governor Wolf in Pennsylvania, Governor Murphy in New Jersey, Governor Newsom in California, and I’m just listing some of them forced nursing homes to accept infected coronavirus patients. They made this mandatory. This led to a huge death toll. About one-third of the national death toll has been concentrated in nursing homes. We’ve seen an absolutely devastating impact on nursing homes.

Barry Nussbaum: Well, let’s talk about the next step. Trump pushed hard in the debate, Daniel, to open the country up. That is, as he put it, the cure is worse than the disease. Trump can’t open the country. It’s up to the states. However, Biden pushed hard, saying if necessary, he would close everything down, I guess, from the federal level. Who’s right and why?

Daniel Greenfield: It absolutely makes no sense to have what Biden called for “national standards.” You’re dealing with this at a local level. Federalizing is not going to make things more efficient. We’ve seen how the federal government deals with things. Making every county dependent, trying to track every single number and having to go to the federal government for permission to do anything would be a complete bureaucratic disaster. We already know how that goes. It would not work, but the Democrats are absolutely committed to having some sort of “national strategy.”

Of course, this would enable them to punish some of their political enemies as a result, if he can do that. If he can crack down on areas and particular businesses, we’ve seen this during the so-called Obama recovery period, where they specifically targeted more conservative industries. While at the same time, funding and bailing out industries that produced more of their donors.

Barry Nussbaum: Well, let’s shift gears for a second here, Daniel. In the first debate you had, Chris Wallace, a Democrat, although he’s a regular on Fox, and Fox put him up as a well-paid conservative. He seemed to debate Trump every time Biden needed the help, and Trump actually commented on that. In the last debate, Kristen Welker, a registered Democrat, interrupted Trump 10 times more than she interrupted Biden according to the count that I saw. What do you think of the job she did?

Daniel Greenfield: The question is: Do presidential debates need moderators? Back in the day, they did not have moderators. You could have, when this was a more liberal country, you could have presidential candidates exchanging ideas, 100 years ago, without having a person sitting there saying, we’re not going to talk about climate change. Now, we’re going to talk about race relations.

This is frankly childish, and we could sort of tolerate it, and we could have the media putting their brand person out there back when there was some pretense of professionalism. But what we see here is not professionalism. It’s a very blatant intervention. Pretty much anybody the media puts up, even if it’s FOX News, the bottom line is Fox News is run by most of the same people who run ABC News or NBC or CNN. Behind the scenes, you are still going to be dealing with the same people. Presidential debates don’t need moderators.

If you are running to be able to lead the country, you should not need a moderator. You should be able to actually speak for yourself. If we absolutely need to have some sort of control over the debate, have the two minutes, have the muting automatically, and that’s that.

Barry Nussbaum: Well, speaking of CNN, Daniel. Very wacky, I hate Donald Trump, I hope he never, ever occupies a political office again. I’m speaking about Jim Acosta. He endorsed heavily the job that Kristen Welker did. Which maybe says he thought it was slanted his way, which is anti-Trump. Do you agree?

They don’t see their job as guiding the conversation. Rather, it’s suppressing the Republican, which will be the job definition of the media itself. The media sees its job as attacking Republicans and defending Democrats. They use various euphemisms like fact-based reporting, guiding conversations, avoiding disinformation, and informing the public. The bottom line is it all comes down to the same thing.

Daniel Greenfield: It’s a pretty cynical argument, because if you recall, back when Obama was first running, his whole thing was that he was going to negotiate with everybody without preconditions. The media, of course, declared that this was absolutely wonderful. When President Trump was saying similar things during his original run, the media attacked it. So we obviously see a very blatant double standard.

On the practical level, we’re not going to make any headway with North Korea. North Korea has been playing every American administration, Republicans and Democrats, in much the same way. The Kim family is going to cling to power by any means whatsoever. Still, the Democrats and their media are guilty of very blatant double standards in which they will say that something is perfectly fantastic when it is said by one of their people. It’s absolutely horrible when Republicans are saying it.

Barry Nussbaum: Yeah, no, kidding. So your take away bottom line, Daniel, who won last night and why?

Daniel Greenfield: So President Trump definitely scored quite a few important points. He got Biden to make damaging admissions, for example, about not only eliminating the oil industry but also eliminating millions of American jobs. It would decimate the American economy. Some estimates are that it might affect as many as 10 percent of American jobs. This would be absolutely devastating. It’s definitely going to affect Biden in certain parts of the country. It’s going to affect some of the Democrats who were hoping to ride his coattails powered by Silicon Valley money.

As far as the overall debate goes, President Trump picked a particular strategy in the first debate. That strategy did not work well. He pursued a much more, I think, effective strategy in trying to reach undecided voters. I think he was effective in that regard. It’s not really about winning the debate like who won and who lost the Olympics. It’s about deciding did this candidate do the particular thing he needed to do.

Biden managed to kind of stay on his talking points, but he slipped pretty egregiously in a few instances. The oil industry was one of those examples. When President Trump challenged him on it, he decided to use a transition talking point, which is a very fundamentally absurd talking point. If you recall, during Obamacare, the administration said, “We’re not going to take away your health care plan, we’re going to transition it.” A lot of people remember that. You’ve got Biden going back, for that matter, to the old Obamacare talking points that will he not take away anybody’s health care plans. All these are fundamentally damaging unforced errors, and President Trump made up for lost time and scored some goals.

Barry Nussbaum: Fair statement. Daniel, thanks for joining us today. Thank you to our wonderful viewers out there who have watched this today. If you want to subscribe to our text message alert system, text the word TRUTH to 88202.

Will Hunter’s Laptop Change the Outcome of the Election?

Islamic Censorship of The U.S. Constitution