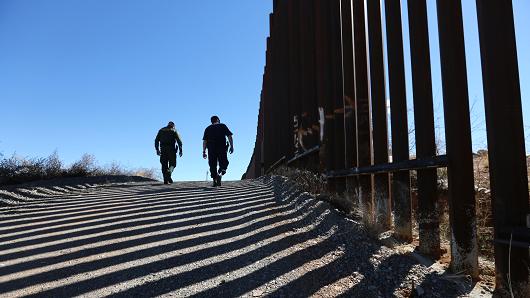 Welcome to this segment of because you asked. I’m Barry Nussbaum

The wall on the Mexican border was candidate trump’s most repeated campaign promise.  He repeated it hundreds of times and phrased it in the following question and answer with each audience at rally after rally.  Mr. Trump would ask rhetorically what are we going to do on the Mexican border? And the crowds would shout back “build a wall” and then he would ask “and who is going to pay for it?” ….and the crowd would yell even louder Mexico!!!!

You have asked what is the latest news on that Mexican wall?

Well first off as you know there is no wall yet…. And no construction has started construction ……and yet the border is way more secure!

the latest report to congress, is revealing what can only ‘be called’, the trump effect.

illegal immigration across the U.S.-Mexico border has continued to fall under president trump.

it is down a whopping 67-percent, through march… Which is an even greater drop from February, when 40-percent fewer illegal immigrants attempted to cross.

Why is this happening?

Simply put, the welcome back to break into the U.S.A. has been removed….and it has been replaced with a pledge from the president to enforce immigration law… And that alone is causing this massive drop in illegal immigration and therefore the huge drop in apprehensions at the southern border.

Customs and border protection agents apprehended fewer than 12,500 people who illegally entered the U.S. from Mexico in march, making it the lowest monthly number in 17 years, according to homeland security secretary john Kelly.

The number of unaccompanied minors and family units who were taken into custody on land dropped sharply to 18,762 in February, the first full month of president trump’s administration, which Kelly said was a sign of decreased traffic of illegal immigrants.

Last month, Kelly said the “unprecedented” drop from 31,578 apprehensions in January reflects a reduced flow of illegal immigrants, and indicates trump’s policies and executive actions on immigration calling for a new border wall and follow-through of all immigration laws— are already causing some to stop before coming. So, let me be clear….31.5k January then 18.7k February then 12.5k march! Wow wow wow!

So, how is the wall design coming? Will it be a wall…a fence…? something else?

Last Tuesday was the deadline for companies to propose designs for president Donald trump’s border wall with Mexico. U.S. customs and border protection asked several of the bidders to build prototypes in San Diego.

The government won’t identify companies until contracts are awarded around june 1 – and even then, only the winners – but some bidders released plans on their own.

The panels would provide electricity for lighting, sensors and patrol stations along the wall. Sales of electricity to utilities could cover the cost of construction in 20 years or less, according to the company. Power could also be sold to Mexico.

“I like the wall to be able to pay for itself,” said managing partner Thomas Gleason.

Crisis resolution security services Inc. Of Clarence, Illinois, proposes a wall that is 56 feet (17 meters) high and 22 feet (7 meters) wide at the top – with plenty of room to allow tourists to enjoy desert views.

The height – nearly twice what the government envisions – would deter climbers, and its width would give the structure longevity, said chief executive officer Michael Hari.

Clayton industries Inc. Of Pittsburgh proposes storing nuclear waste along the wall in trenches that are at least 100 feet (30 meters) deep.

Money already collected by the U.S. department of energy from people who benefit from nuclear power would help pay for the wall.

The bid includes an option for hardware to convert the nuclear waste to energy.

Artwork on both sides of the border

Russ Baumgartner, CEO of the company, says the wall should be “a piece of art.”

Customs and border protection’s solicitation says the wall should be “aesthetically pleasing” from the U.S. side. Baumgartner wants to decorate both sides.

Dark pulse technologies of Scottsdale, Arizona, proposes a concrete wall that can withstand tampering or attacks of any kind.

“you could fire a tank round at it and it will take the impact,” said company founder Dennis O’Leary.

Fiber sensors would be embedded in the concrete to immediately alert officials to any attempts to climb over or tunnel under the wall. It would be coated with a slick coating that would prevent climbing.

Thankfully border enforcement is under the jurisdiction of the federal government, specifically ice.  Regardless of California state shenanigans, once the wall is in place, the federal government will shut down illegal entry at the border much to the chagrin of the democrat party in California. In addition, funding cut off for sanctuary cities is already starting to have an effect.   As local budgets begin to go upside down into the red, due to the fed $ cut off’s, I predict there will be a profound difference in cooperation between local law-enforcement and ice throughout the country. In Texas, it will soon be illegal for local officials to defy federal law. Gov abbot in Texas is the complete polar opposite of gov. Jerry brown in California!

The government expects four to ten bidders to be in the running to build the wall. The finalists must have worked on a border security or similar project in excess of $25 million in the past five years.

Thanks for this great question!  Please keep your questions coming to American truth project and our social media on Facebook or twitter.  If we select your question you will get a special gift!!!  You can also write to me directly by sending me an email to: barry@3xu.0c4.myftpupload.com.  And go to our website where you can sign up to be on our mailing list so you never miss an important episode.

We’re here to answer your urgent questions because you asked…. I’m Barry Nussbaum