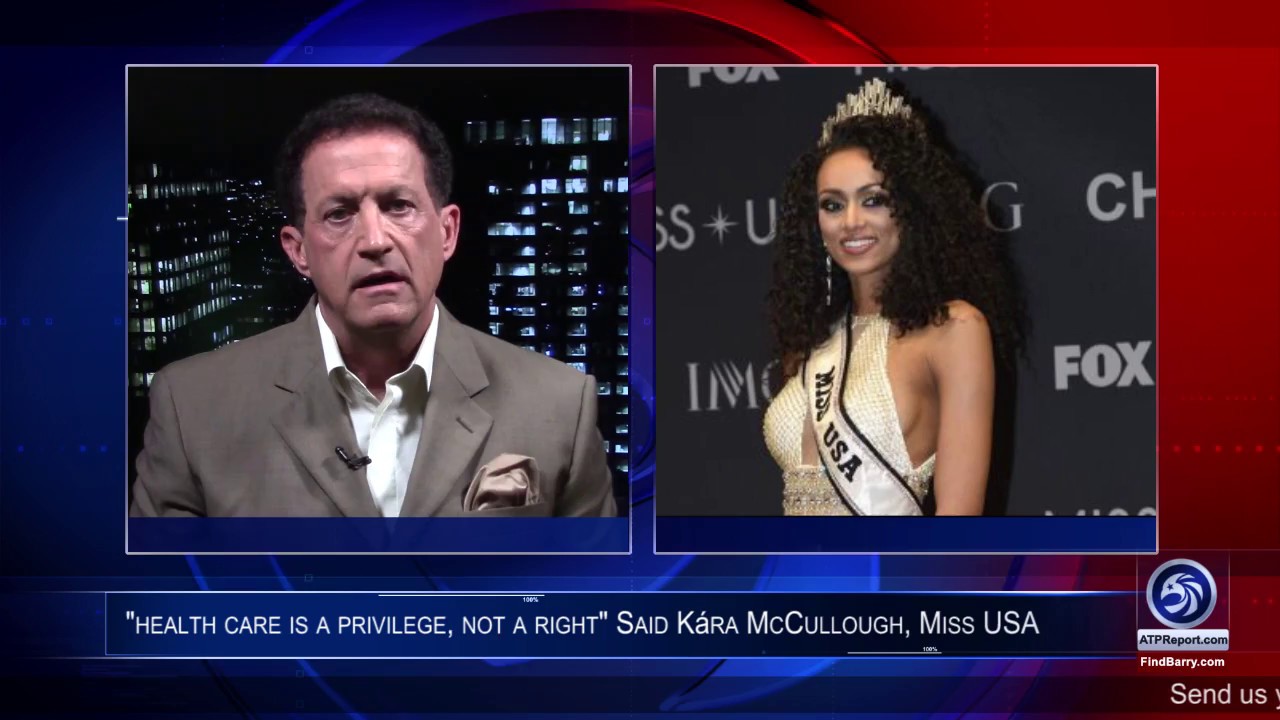 An ATP Report Production – on this episode Barry Nussbaum explains the difference between a right and a privilege.

In last weeks’ Miss USA pageant, the newly-crowned Miss USA Kara McCullough, a scientist who works for the U.S. Nuclear Regulatory Commission and who competed as Miss District of Columbia, was asked if she believes health care should be a right or a privilege for American citizens.  McCullough faced widespread backlash from liberal social media users after she called health care a “privilege” and not a right while answering this question onstage during Sunday night’s pageant.
“I’m definitely going to say it’s a privilege,” the 25-year-old pageant winner said, adding that taxpayers shouldn’t be forced to subsidize someone else’s health care.
Perhaps there is such a widespread outcry against the words of Ms. McCullough, because most Americans assume health care is a right.  Today on Because You Asked, we will answer the question, what is the difference between a right and a privilege as it applies to Obamacare and eventually to the GOP replacement for it, it is clearly something you want to know!
How is privilege defined?
A privilege is a special benefit or permission granted to an individual or a group based upon status, class, rank, title, or special talent.  Thus, privilege is a special right not available to all members of the society but is rather restricted to a chosen few in the society. While some members of the society enjoy this right, others are excluded or denied these rights. For example, members of government are granted certain rights that are not available to common citizens.  Congress members are protected from any legal action for their behavior inside the congress which is considered an immunity or privilege granted to them under the law.  Immunity to diplomats from security checks at airports is a case of a privilege that these people enjoy.  So, in the sense of health care being free for some Americans and costing a great deal for other Americans, it would seem that to not pay for health care is a privilege afforded to those that cannot afford it.

How is a right defined?
Rights are societal norms in the form of freedoms that are available to people by virtue of being citizens of a country or as members of a society. Rights are considered as fundamental and inalienable, for example all citizens of a country are granted certain rights under the Constitution. Right to life is considered to be the most basic or fundamental of human rights and no human being can be denied this right under any condition or pretext. Right to freedom or liberty is another basic right that is inalienable and has to be claimed if not given by a government to its people.
Many of the rights that are so dear to the hearts of people such as the right to vote, work, move freely inside the country, choose a profession, profess a religion or the recent right to education have gradually evolved with the passage of time and enlightenment of people. Right to equality is a right that has taken centuries to be accepted and declared legal in many countries. This is one right that ensures that there can be no discrimination on the basis of color of skin, gender, religion, language, ethnicity etc. Today there is a world of rights as we see with animal’s rights, people’s rights, and children’s rights and so on. There are natural rights that flow from being human beings, and there are legal rights that are different in different cultures.
How do rights and privileges compare?
Privileges are prominent everywhere within society. Participation in certain events or functions is meant exclusively for members or those who qualify, examples as golf clubs, places of employment, and business establishments. You have a right to use the bathroom, but you do not have permission to use this bathroom: paying customers only!

So, what qualifies as a right? To cite the American Declaration of Independence, all men (i.e. mankind) are Created equal and endowed by their Creator with certain inalienable rights such as Life, Liberty, and the Pursuit of Happiness. It is often said that an opportunity to do something or have something comes from the Constitution, it is a right possessed by Americans, or if a law is passed that either amends the Constitution or extends a privilege to all Americans, then by law it would be considered a right.

Based on our segment today, to call health care a right is incorrect, unless it is qualified with the terms, “you have the right to buy health insurance!” or you have the right to health insurance at no cost if you are poor. However, because it is granted to only a select segment of our American society, I would conclude that health care, or at least no cost health care, is a privilege afforded to a segment of our society only.  If everyone got it for free, then I would call it a right.

Please keep your questions coming to American Truth Project and our social media on Facebook or twitter.  If we select your question you will get a special gift!  You can also write to me directly by sending me an email to: barry@3xu.0c4.myftpupload.com.  And go to our website where you can sign up to be on our mailing list so you never miss an important episode.  We’re here to answer your urgent questions because you asked, I’m Barry Nussbaum.

Because You Asked: What Is the Significance of President Trump’s Visit to The Middle East?

President Trump’s Trip to the Middle East and Why It Is Getting No Coverage.