Why Keith Ellison’s Election as A.G. Should be Terrifying 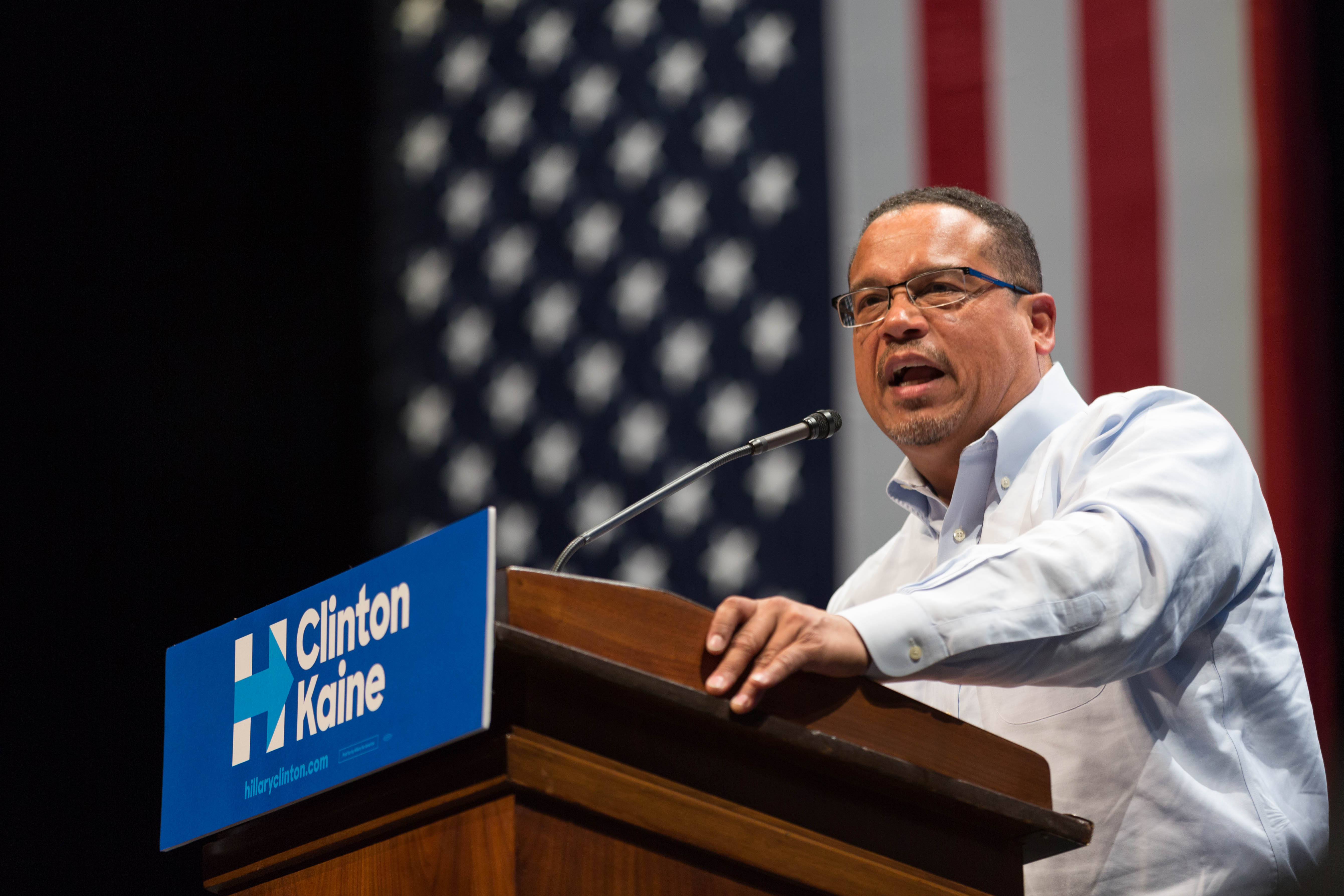 This race should have been an easy win for any typical Democratic candidate. After all, Democrats have won the Minnesota Attorney General race in all of the previous five elections. In the past four elections, the Democratic margin of victory was well over 10%.

But leading up to the 2018 election, polls had been even, and some showed Ellison trailing. To gain victory, Ellison was forced to raise and spend almost twice as much as his Republican opponent. In addition, Ellison found himself facing shocking allegations that he had emotionally and physically abused his ex-girlfriend.

So, Ellison’s victory, to become chief law enforcement officer of a major state, was quite stunning. A closer look at Ellison’s controversial past makes his rise to this new level of power all the more terrifying. Here are ten of the biggest reasons why.

That cleric later fled the United States and took refuge in Yemen as a spiritual leader of and recruiter for al Qaeda. There, on September 30, 2011, he was targeted and killed by a U.S drone strike, ordered by President Obama.

Keith Ellison accepted money in contributions from Jamal Barzinji and Hisham Al-Talib. Ellison attended a private fundraiser at the northern Virginia home of a man who led a group tied to the Muslim Brotherhood.

Barzinji and Al-Talib have served as vice presidents at the International Institute of Islamic Thought (IIIT), a Northern Virginia think-tank, which federal authorities suspect was part of a terrorist financing network. In addition, a previous FBI investigation concluded that Barzinji and Al-Talib were among U.S. leaders of the Muslim Brotherhood when they came here as students.

Barzinji and Al-Talib have been involved in and have helped finance criminal organizations including the Holy Land Foundation for Relief and Development, and a think tank that served as refuge for at least four members of the Palestinian Islamic Jihad’s governing board during the early 1990s.

In October 1992 Ellison publicly came to the defense of Sharif Willis, a convicted murderer and ex-convict, who was then the leader of the violent Minneapolis-based Vice Lords Gang. In November 1992, four Vice Lord members used Willis’s house as their headquarters for planning the murder of a local police officer named Jerry Haaf.

At the trial of one of the killers, two witnesses implicated Willis in the plot. However, Willis himself was never charged, because law-enforcement authorities said they lacked sufficient evidence to convict him. Ellison helped organize a demonstration against Minneapolis police, during which he denounced “the campaign of slander the police federation has been waging” against Willis.

Ellison also told the crowd that the police union was systematically trying to frighten white people to encourage the city to hire more officers, and thereby strengthen the police union’s power base.

In February 1993, while the trial of Officer Haaf’s killers was in progress, Ellison led a protesting crowd outside the courthouse in the chant: “We don’t get no justice, you don’t get no peace!”

In February 1995 Willis was convicted in federal court for several drug and gun-related offenses, for which he was sentenced to 20 years in prison. In May 2017, the former Vice Lords gang leader was released, and involved himself as leader of a Minneapolis peace conference, similar to an organization he had co-founded before it was caught up in the 1992 execution-style murder of Minneapolis Police Officer Jerry Haaf.

In 2008 Ellison spoke at CAIR-Tampa’s sixth annual banquet, where he urged his listeners to support Sami al-Arian, the former University of South Florida professor who had confessed two years earlier to conspiring to supply goods and services to the terrorist group, Palestinian Islamic Jihad.

Al-Arian himself had been the subject of an FBI investigation since 1996. He had long been publicly identified as a terrorist by close observers of the Islamic Jihad movement, including reporters for the Miami Herald and Investigative Project director Steven Emerson.

The Council on American-Islamic Relations’ (CAIR) executive director, Nihad Awad (a self-identified supporter of Hamas), spoke at an August 25, 2006 fundraiser for Ellison, who accepted thousands of dollars in campaign donations raised by Awad. The Ellison congressional campaign received roughly $50,000 in contributions that were given or raised by CAIR officials.

CAIR, Muslim Brotherhood front group, is linked to Hamas and was named an unindicted co-conspirator in the terror-finance trial against the Holy Land Foundation in 2008.

This anti-Semitic, anti-white, black separatist was Leader of the Student Non-Violent Coordinating Committee in the 1960s.  He popularized the slogan “Black Power”. He identified Malcolm X, Che Guevara, and Mao Zedong as his three greatest heroes. His infamous quote was, “The only good Zionist is a dead Zionist.”

In February 1990, Ellison participated in sponsoring Kwame Ture to speak at his law school on the subject, “Zionism: Imperialism, White Supremacy, or Both?”—a speech that proved to be deeply anti-Semitic.

This African American political and religious movement was founded in Detroit, Michigan, by Wallace D. Fard Muhammad on July 4, 1930.

NOI is a Black Nationalism group that mixes racially supremacist ideology with the belief systems of Islam—they read the Quran, worship Allah as their God and accept Muhammad as their prophet. Fard believed that African-Americans should prepare for a race war and that Christianity was a religion for slave owners.

In 1995 Ellison worked actively on behalf of the Nation of Islam. At a University of Minnesota rally to promote Louis Farrakhan’s highly anticipated Million Man March, Ellison, who organized the rally, appeared onstage with Khalid Abdul Muhammad, who delivered a thundering, racist tirade.

This notorious leader of the Nation of Islam orchestrated the 1995 “Million Man March”.  He is renowned for his numerous speeches denouncing Whites and Jews in hostile tones.

In a November 6, 1995, column for the Minneapolis periodical Insight News, Ellison wrote under the name “Keith X Ellison” and condemned a Star Tribune editorial cartoon which implied that Farrakhan was an anti-Semite. Ellison argued to the contrary, saying that “Minister Farrakhan is a role model for black youth”; “he is not an anti-Semite”; “he is a sincere, tireless, and uncompromising advocate of the black community and other oppressed people around the world”; and is regarded by “most black people” as “a role model for youth and, increasingly, a central voice for our collective aspirations.”

After Fidel Castro died in November 2016, Ellison issued the following statement about the late Cuban dictator:

“He was a revolutionary leader who confronted a system of government that excluded everybody except the military and the money-rich. And he took them on, defeated them and then set the country up in a way where … Did he use harsh dictatorial tactics? Yes, probably he did … but, did he also stand up for peace and freedom in Africa? Absolutely. His Cuban forces took on the South Africa apartheid military forces and defeated them.’

To any reasonable, informed observer, Castro was a mass-murdering Communist monster. Read Humberto Fontova’s books about him to learn what a ruthless tyrant he was. His evil and crimes against humanity were equal to those of Stalin, Mao and Hitler.

1) Keith Ellison: Perfect for the DNC

In a 2016 article for Frontpage Magazine, Robert Spencer documented how Keith Ellison was a perfect choice for the role he would gain as Deputy Chair of the Democratic National Committee. Ellison held that job from February 25, 2017 – November 8, 2018, under DNC Chair Tom Perez.

Ellison has made a lifetime political career by embodying the most extreme elements of the American societal experience. He has consistently defended and associated with the most hateful, violent and divisive of fringe group leaders and actors, some of whom have proven to be operating toward terror and the destruction of America.

Keith Ellison’s long-standing ties to and affinity toward the anti-American forces of the Muslim Brotherhood, NOI, dictatorial state Communism, bigoted racial supremacy, Jew-hatred, cop-killing, and perpetrators of street gang violence, are what make him a model representative of today’s Democratic Party leadership.

And now, his rise to the top levels of law enforcement power should scare you most of all.

Anni Cyrus: MSM Says Kyle Is A “White Supremacist” For Shooting White Guys In Self Defense!”

Anni Cyrus: Facebook Does Not Promote Free Speech Unless It Follows The Party Line