We are raising money to cover production costs associated with interviews with experts such as Clare Lopez, Philip Haney, Daniel Greenfield, Robert Spencer, Charles Jacobs, Dr. Bill Warner, Israeli Ambassador Danny Ayalon, and more. The citizens of our Republic deserve to know the truth and we are committed to telling it. By accurate reporting and advocating on behalf of our nation we can preserve our freedom. But we’re telling you we cannot do it all alone. We are asking you to join American Truth Project in this crucial time as we fight to preserve our freedom.

No donation is too small!!!… It all will be going to a great cause.

The facts are clear: we are under attack!

There is no question that America's national security is being threatened as never before. Our Republic and the rights guaranteed by our constitution are facing dangerous new enemies, both foreign and domestic. Only a few quality sources are dedicated to enlightening the general populace on the truthful nature of this danger.

The American Truth Project (ATP) was launched to strategically combat this insidious threat.

Our issues cover US/Israel Relation, BDS/Anti-Semitism, Homegrown Terrorism, Radical Islam, Middle East Policy, and many others. Unlike many media outlets, we are determined to deliver much-needed factual information related to these issues by means of our educational materials such as videos, articles and podcasts.

Speaking of credibility, American Truth Project (ATP) should be trusted because we are 501C3. To obtain that status we went through a rigorous vetting process. More so, our founder Barry Nussbaum, a long-time foreign and national policy expert, also the son of survivors of the holocaust is an expert when it comes to the issue of antisemitism. This isn't only because of his Jewish heritage but in addition he visits Israel regularly. Mr. Nussbaum stays informed by maintaining close relationships with Israeli public figures, military, current and past government officials and other Israeli insiders.

Our national director Anni Cyrus is an ex-Muslim and a former child bride. She is no stranger to these issues either. She has extensive experience with the issues of Radical Islam, Homegrown Terror, and Middle East Policy. She was born in the Islamic Republic of Iran and lived under Sharia for many years of her life before becoming an American citizen. 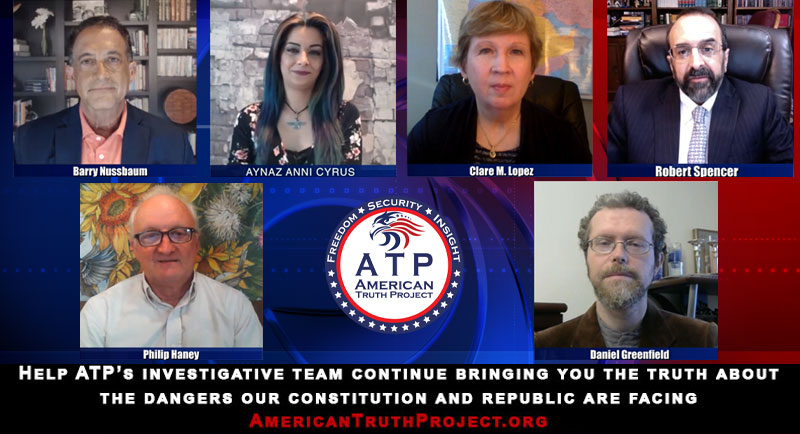 Our guest list adds to the depth of knowledge at ATP. On a regular basis we air interviews with experts that include Clare Lopez, a former CIA agent whose wealth of experience working within our government makes her a go-to when it comes to the issue of Middle East policy. Philip Haney is also a regular contributor. He is one of the founding members of the department of Homeland Security. Mr. Haney bringing a unique insider knowledge that cannot be found elsewhere on the issue of Homegrown Terrorism.