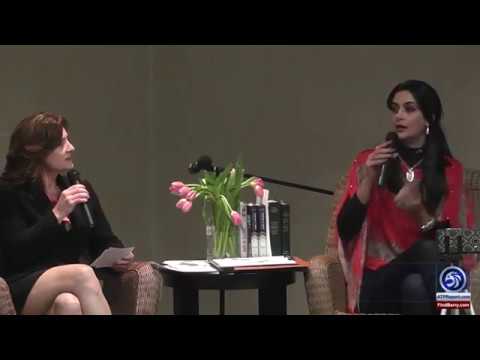 Dianna Ploss: Why is that?

Aynaz Anni Cyrus: First of all, Allah said in Quran over ninety-one verses in Quran says Mohammed as a perfect example of a man and you should follow in his footsteps. That’s number one reason. Allah himself said Forget about me, follow Muhammad. And a ninety-nine-point nine percent of Sharia is based on what Muhammad wanted to do and did. You look at Quran every verse that overrides the older verse, somehow, it’s very convenient for what Muhammad was going through at that moment and how it would please him. You look at his life. Everything was for his benefit. So, the whole Islam thing was created by Muhammad. So that Mohammad is a priority when it comes to it.

Dianna Ploss: No room for women in there. No no no no.

Aynaz Anni Cyrus: Definitely there are two things that for sure Mohammad hated with everything he got that was woman and animal.

Dianna Ploss: Animals. Did you say animals? He hated women, but he had a lot around him.

Aynaz Anni Cyrus: He hated women as human. He loved the woman as sex slaves.

Dianna Ploss:  As in his cooking and producing babies?

Aynaz Anni Cyrus: That is the purpose of woman. As CAIR mentioned I have said that the only reason for existence of a woman in Islam, is to seduce a man or to please him and actually they put that wrong in there, to please a man and also continue the generation of men and many Muslims.

Dianna Ploss: So, does that mean that they can have multiple wives.

Dianna Ploss: People that I talk to they don’t believe that it’s happening in the United States.

Dianna Ploss: I mean that’s the magic number. I think that’s half of a football team, right?

Why the Golan Is So Important!

Joe Biden is a candidate with a BIG problem!