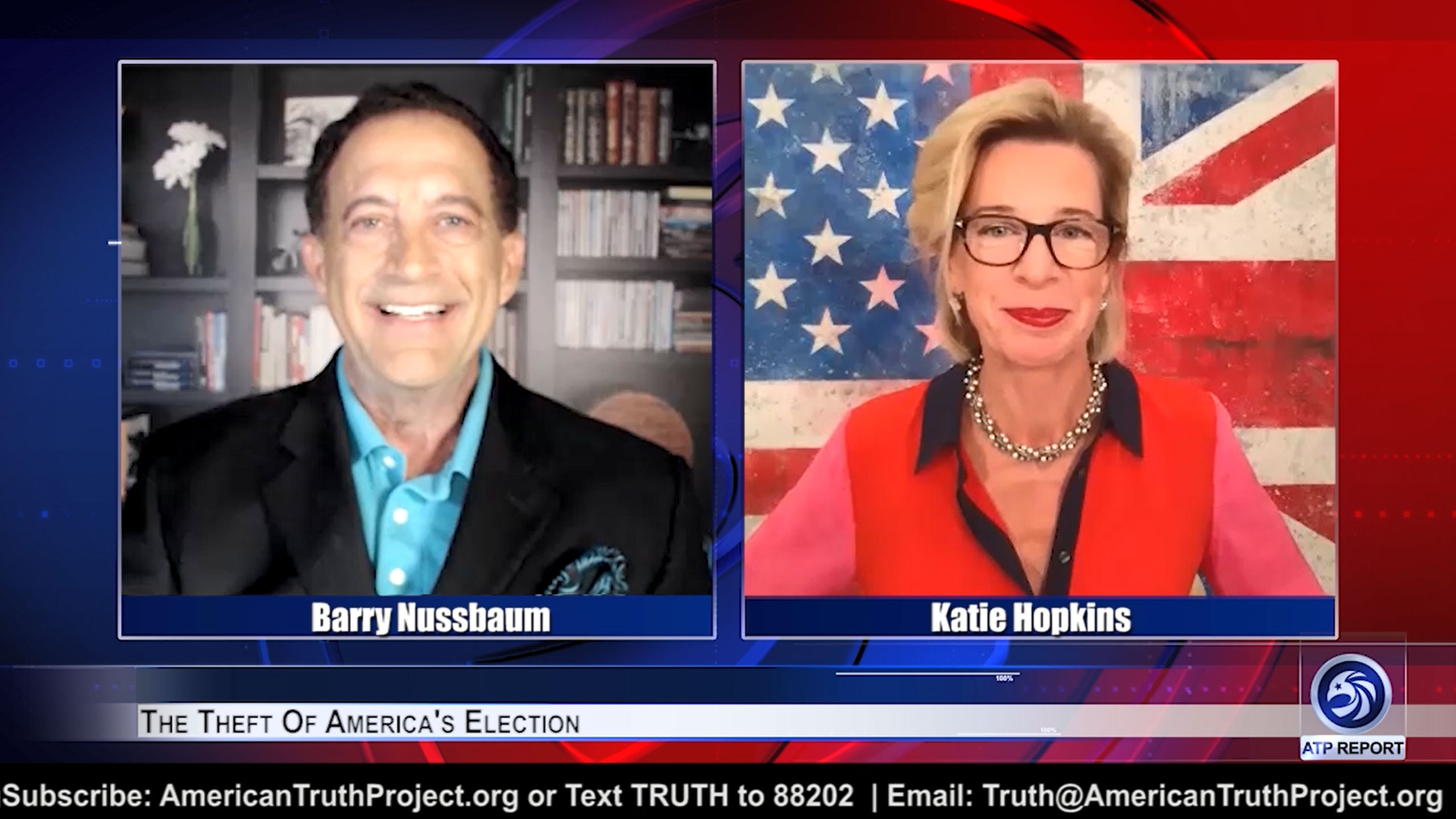 Barry Nussbaum: Hello, and welcome to ATP Report. I’m Barry Nussbaum. We are welcoming aboard for our first show with her new title, Katie Hopkins, all the way from Great Britain. She is the ATP Truth Ambassador for all of Europe. Katie, welcome to the show.

Katie Hopkins: Thank you very much, indeed, Barry. And thank you for my exciting new title that I have. I’m very pleased to have that. It’s strange to me to be back here in the U.K. after three months on the road in America.

Barry Nussbaum: I bet. I’ve got a zillion questions for you, so let’s just kick it off. So, where you just left the U.S. to go home, we are in political turmoil because of the chaos of the post-election non-decision in a number of states. Let’s start off with this one. How are we, the Americans who can’t figure out who the next President is yet, being looked at by the Brits?

Katie Hopkins: So, from a personal perspective, I feel guilty for leaving. It’s not like me to leave a fight. I feel horrible about the fact that I’m not there on the streets. If I was in America, I would be on a plane to Phoenix or somewhere just to support and hold the line. From a

British press perspective, the lying press, they’re desperate to call it for Biden, Desperate. It’s all I hear, this anxiousness, this desperation to just call it for Biden. If they could, they’d have called it on election night. Then there’s also this utter, utter lying. They’re trying to mock the President, saying he wants to count votes if they’re for him and stop the votes if they’re not for him. Of course, the President is not saying anything like that. So all I can say to Barry is it’s absolutely sickening, and it’s heartbreaking to watch the lies being pushed out. It mimics your lies in terms of the eagerness of people to call states for Biden.

Barry Nussbaum: So obviously, you’ve anticipated my question very well. I take it the entire mainstream media, and everybody that has a microphone of any kind is pro-Biden, anti-Trump and just wants it over?

Katie Hopkins: They want it over, and they’ve been delivered the script that says this is a slower blue wave. You know, the reason this is unfolding blue is because it’s more of a blue sweep. You know, they’ve been given the same narrative. They’re pushing it hard. They love it. A thousand votes ahead in Georgia, that’s the leader. They keep using it. It’s done in a really horrible way, Barry, where they say, “Oh listen to the chant, stop the count, stop the vote, stop. That’s when he’s losing. Listen to them count every vote, every vote count. That’s when he’s winning.” They’re using lines out of context to mock the President and to mock American patriots. It makes me want to run away. I have done a lot of running the last couple of days for precisely that reason. I just need to run away from the awfulness of the lies.

Barry Nussbaum: Yeah, we feel very similar on this side. So, you toured America. I mean, you covered the territory that is not unlike what the Trump family did. Every day you were somewhere else. You saw incredible crowds. I remember we did shows together, and you were just blown away by the support for the President. What did you learn about the depth of the Trump support out there, and what did you learn about America on your trip?

Katie Hopkins: Oh, just that gives me shivers, just even thinking about it. But I think I learned the truth of what we’re seeing if this election had gone, how we know it will go, and will go eventually. I still believe, Barry. I’m a believer. I learned the depth of the support for Trump from every kind of person. From the lady behind the till in CVS. I spent a lot of time at CVS. From the Uber driver, the Lyft driver in Dearborn, and in Minneapolis, in Minnesota, telling me he’s now with Trump as well. The USPS guy with the blue hair who I was certain was a Democrat, Trump supporter. The people who showed in Florida when the polls are lying and saying an eleven point lead for Biden when we actually turned it around and produced a red outcome. That’s the stuff I learned. It’s the stuff I still believe, Barry. Nothing I’m hearing changes everything I believe in my heart and my soul that Trump wins this. Nothing will change that, and nothing will change that in my life, actually. I consider myself a good person. That would always if I if I’m told I’ve lost, I’ll suck it up. But I don’t believe that. I don’t believe we lost.

Barry Nussbaum: Well, let me ask you then the big question. From the perspective of someone that has watched way too much news in the last month, I’m referring to myself, I would see 26,000 people in a stadium for the President and 26 people in a parking lot, in a goofy white circle, in a folding chair for Biden, who stumbled over reading from a teleprompter. And that’s if he left his house. The outpouring of support was like nothing in my lifetime I’ve ever seen. It was as if the New York Yankees won the World Series and had a ticker-tape parade down Madison Avenue in New York. That was every Trump rally, sometimes three, four, or five times a day. So, Katie, from your perspective as an outsider who really knows the inside works because you were here, what happened? What went wrong?

Katie Hopkins: You know, we should make the point Barry and I know many people know, but these rallies didn’t just happen in Alabama, Texas, or Florida. This was Beverly Hills. I watched people walk up to the rally, and they were nervous, and maybe they have never voted with Trump before, and they were amazed. They were amazed by the different people there. So many black individuals being joyous. So many small children because parents felt comfortable bringing their children because this was uplifting. You know, the joy of our side and its dynamic was something that like I’ve never seen. In terms of what went on, I think it was fairly true to what we thought might happen was that the red wave Trump support was so big that the fraud wasn’t quite big enough. When they slowed the counting or stopped the counting to bring in those additional ballots in white vans with unmarked or plates from out of town, they didn’t bring in enough because they didn’t anticipate the level of Trump support that there actually is out there.

I’m very reassured by the news out today of, you know, from the Trump team saying, hold the line, we still will have this. The President will be re-elected. But the fraud and the stories of fraud that I’m sure your audience has seen have been everywhere. Of course, that’s another discrepancy with the British press. Every single time they’re on, they say there is no evidence of fraud. Have they not seen the videos that we’ve seen? Have they not seen the guy flipping off a ballot and then screwing it up? I mean, how can they say no evidence of fraud?

Barry Nussbaum: So let me ask you this. I’m going to put you on the spot. I did a show yesterday where I made a proposal, and I’m going to make the same proposal to you, and I want the Katie Hopkins expert opinion. I agree with you. I think the fraud is not only prevalent and commonplace but on a scale maybe unprecedented outside of a place like the old Soviet Union or today in Iran. If indeed, hundreds of thousands of ballots have been rounded up and delivered that were fraudulently obtained. Still, they’re on the real ballot paperwork then when they’re mixed in with legitimate ballots, Katie, even if the Trump campaign in court is able to obtain court-ordered or state-approved recounts, you’re counting the good and the bad ballots in the same pile, and there’s no way to discern which are the bad ones, with the possible exception of, well, there’s a bunch of dead people that they’ve already found that voted in Philadelphia. Or people in Nevada that voted that don’t live in Nevada. With those minor exceptions, the big numbers are going to be re-confirmed. Therefore the remedy, in Barry’s opinion, but I want to get Katie’s opinion on this proposal, ought to be if this gets to the Supreme Court and the Supreme Court asks the lawyers for the Trump campaign, what are you asking us to do if we agree that there’s evidence of fraud? Instead of asking the courts to recount, my proposal is, which I believe will re-confirm Biden wins, and as of now, he hasn’t yet won. My proposal is a revote, and you revote in the states where the court agrees that fraud is proven, and it could be done in several weeks. No mail-in ballots. Vote in person. Unless you have an issue like your eighty-five, you’re infirm, you have COVID, you can’t get there, but the number of ballots that come by mail might be, well, one percent, and the ones that vote in person are the ninety-nine percent. What do you think of the Barry remedy for what’s going on?

Katie Hopkins: I love the Barry solution. I think it’s perfect. I completely agree that a recount is not the answer. That is not the remedy. Vote in person with I.D. That is a remedy. Those who cannot, for obvious reasons, vote in person should specifically request a mail-in ballot. They have to have some form of I.D., proof, or whatever that thing that goes with a mail-in ballot that makes it okay. I heard today someone say that this could, in fact, be sort of classified as an advisory election or could be classed as an invalid election. I think that’s what we need. And I think it has to be in-person, it has to be re-run, and I think it has to be done quickly. Because my fear as well is we need to keep the energy behind this thing. We can’t go to this place that people quickly go to, which is, oh, well, you know, it’s a fraud, but never mind. Yes, we mind. Yes, it matters. Yes, this fight goes on.

Barry Nussbaum: Well said and especially very well done for agreeing with me. Now we need another, well, at least five justices on the Supreme Court out of the nine sitting justices to agree when the case gets there, Katie.

Barry Nussbaum: I really appreciate your time. Those of you out there who have not yet subscribed to our text message alert system, type the word TRUTH, and send it to 88202. Katie, thank you, and thank you to our wonderful audience for joining us today. For ATP Report, I’m Barry Nussbaum.