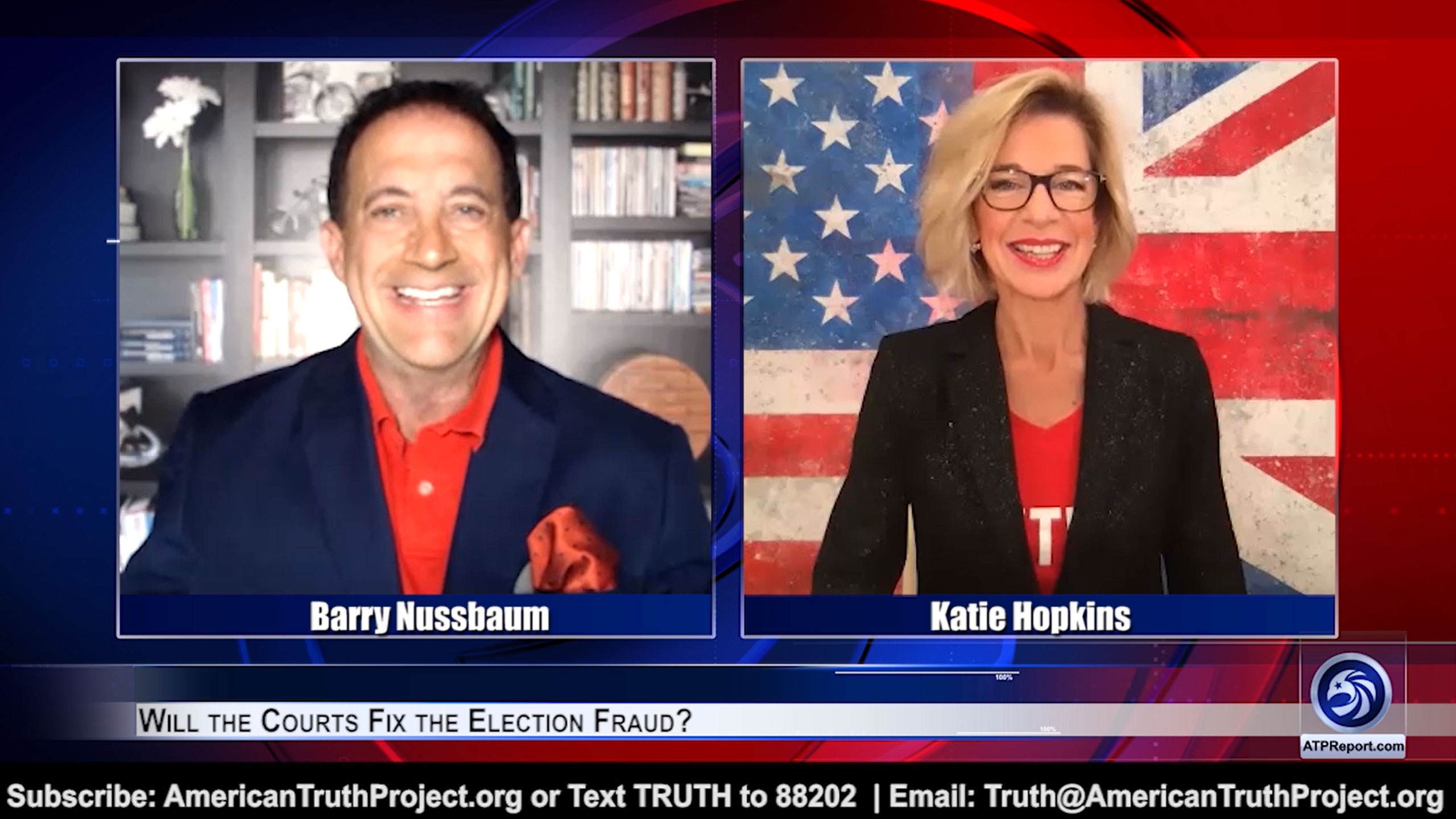 Barry Nussbaum: Hello and welcome to ATP Report. It’s the Katie and Barry show. Joining me from the other side of the Atlantic Ocean is my partner on the Katie & Barry show, Katie Hopkins.

Katie Hopkins: My introduction is getting more grand, Barry. I love it.

Barry Nussbaum: Well, you are more grand, so it’s just not it’s normal. So, we’ve got a really interesting situation coming up in a couple of weeks on our side in Washington. We have a newly elected senator from Alabama, Tommy Tuberville, who said that a couple of days after he gets sworn in, which I believe will be January 3rd.

On January 6th, the Electoral College will present their votes to the Congress for confirmation. Which will solidify Joe Biden as President if the results are accepted. We have talked about the possibility of someone raising their hand to protest in the House. If they do, it automatically goes to debate whether or not to accept all or part of the Electoral College.

Somebody would need to raise their hand and do the same in the Senate. There is a number of people starting with Representative Mo Brooks in the House willing to protest and demand debate and if Tuberville stands up in the Senate. He will be the first senator to do so. So then what happens? You understand our process. What do you think?

Katie Hopkins: My understanding is that if Tuberville or whoever matches that objection, then they have this moment where they have a debate. I think for the period of, I believe it’s two hours.

Then when it comes back, there would need to be a majority for that objection to stand. My understanding, Barry, and I know you’re the expert, is that commentators are saying it’s unlikely that that objection would be upheld, but then many things in life are unlikely.

Yet, they can still happen. So, of course, I’m looking for hope. I want to believe that this objection could stand. I want people, good people, to stand up and say, “No, we will not accept these electoral votes.” Is it likely, Barry? Will this happen? Will this objection stand?

Barry Nussbaum: Well, in the House, it’s a majority Democrat, so at least a few people have to cross over. Then you need a majority in the Senate as well, a simple majority to protest and not accept.

The problem is a number of senators, Ben Sasse of Nebraska, John Thune of South Dakota, Shelley Moore Capito of West Virginia, Roy Blunt of Missouri, Mitt Romney of Utah, Lisa Murkowski of Alaska, Susan Collins of Maine have all said Biden is the President. So, it seems to be a fait accompli, but let me read you this.

Barry Nussbaum: On the fraud checklist. Dead voters voted in every state. Tabulation software from Dominion has been proven to be corrupted. Dominion executives were part of Joe Biden’s donor team. Observers were illegally removed in almost every state.

There are mathematical impossibilities in certain precincts. Fifteen thousand ballots just vanished in Georgia. In a number of places, more people voted than there are people. Fake signatures were accepted because illegally, they threw out the verification process.

Over a thousand affidavits have been signed alleging voter fraud. Voting machines were processed in China. It’s been proven that the voting machines can be hacked.

Now, as an American who believes very strongly in the right and the privilege of people not only getting to vote but being confident in their vote. With everything I’ve just read you how is it possible that even conservatives are saying, let’s just get over it?

It’s so annoying to me that someone like Mitt Romney keeps sucking up to the other side in the hope that he’ll climb the greasy pole faster if Biden is inaugurated. Presumably, that’s what they’re padding is their future nest?

Barry Nussbaum: Well, there’s an alternative to all of this, which is an extreme remedy. I listened to a speech and then an interview with General McNamee, brigadier general, formally in charge of all nuclear weapons. Ran NORAD in Alaska, flew four hundred missions in Vietnam. Highly, highly decorated.

General McNamee talks about so much fraud. In the interview, he said, “Look, just in Pennsylvania, 1.8 Million ballots were set out in response to absentee requests, but two and a half million came back. In other words, 700 plus thousand ballots appeared, but we’re never requested.

All the records are gone, Katie, so McNamee says, his suggestion, declare martial law. The President can do it under a number of different legal maneuverings that have already been put in place. Go seize all the machines.

Go round up the people that were behind it. Put them on trial and make the truth come out. Because I got to tell you, from my perspective, I’m sick and tired of network after network after network. And I include FOX in this, saying there are no provable evidentiary allegations supporting voter fraud. Oh, my God, please. Who believes that?

So, it is not an extreme remedy in that sense. If they go for martial law, would it be on a state-by-state basis? How does it work? How can they make that happen?

Barry Nussbaum: Well, martial means military. So, what happens is active-duty military works directly for the executive branch to enforce certain laws that have been ignored. If it were me advising the President, I would say, look, there are seven swing states.

All of which on November 3rd at night when we went to bed in the US, Trump was winning by a landslide. By the morning, all those leads were gone. Everybody knows the states. It’s Nevada, Arizona, Georgia, Pennsylvania, Wisconsin, Michigan.

He says the President knows who they are. It would just be in those states, Katie. They would go get the people but then what happens in January with the inauguration? That’s the part I don’t really even have a suggestion for now.

Katie Hopkins: No, and I think one of the continuity things, Barry, that we can all hold on to is that none of us and I appreciate I’m a foreigner and an outsider will ever accept Biden/Harris. We will not, no matter what happens, no matter what remedy or none, we will never accept this election’s results.

Barry Nussbaum: I’m one of those two, Katie. To say, well, there might have been irregularities, but let’s move on. It would be like, God forbid, there’s a terrible crime against your family. Yeah, yeah, yeah, some people got hurt, and somebody died.

You know what? It’s time to move on. No, I want the truth. I want the bad people captured, put on trial, convicted, and punished. Because if we let this go, who the heck is going to trust the next election?

We have to. How on earth does he wake up in the morning and find that whatever it is to be able to still have that I don’t know what it is resilience to say, “Come on, we got to keep fighting.” He just does not give up.

Barry Nussbaum: Think about it this way. He’s been facing the press for four years. They’ve treated him worse than a criminal. They treat his wife horribly. They’ve attacked his family brutally, and he still gets up, puts a smile on his face, and walks to the microphone. The guy has a skin that is six miles thick, and that’s why he’s Donald Trump.

Katie Hopkins: I think we’re watching that contrast, aren’t we, as well with how they’re already treating Dr. Jill Biden as if she walks on the wings of unicorns and doves? She is the hero we’ve always been waiting for.

Barry Nussbaum: Exactly. Thanks, Katie. Appreciate you coming on today. For those of you out there that haven’t yet gotten the free chapters of my new book. Text B-Y-A to 88202. We’ll send you a link.

Communist China is Behind the American Coup