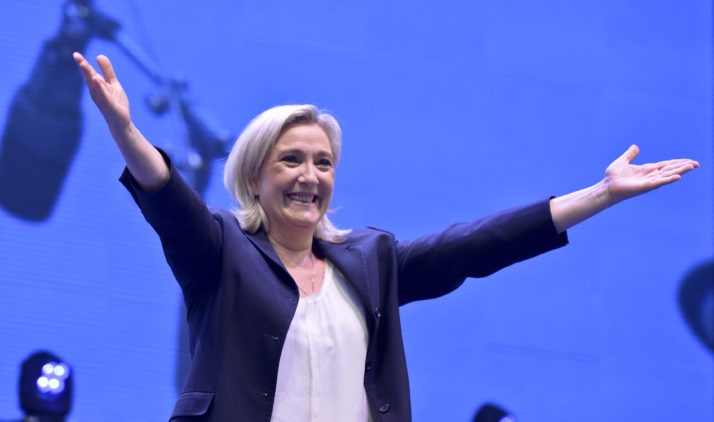 Welcome to this segment of Because You Asked. I’m Barry Nussbaum.

The past six months have included two absolutely stunning political surprises on the world stage.  The first, which was predicted to fail, was the successful vote to facilitate the exit of Britain from the European Union, called Brexit, all the experts predicted the vote would fail and Britain would remain a member of the EU.  Obviously, they were wrong.  The majority of voters put Britain first, and so very shortly Britain will disengage from the EU.  Brexit was followed by what is called the biggest upset in American political history with the victory by Donald Trump over Hillary Clinton.  Again, putting one’s own country first resonated with the voters here in America.  Now France is facing a similar question when their voters go to the polls in a few weeks.  The leader in the polls is a lady you might not have heard of or know much about so you have asked, “who is Marine Le Pen and what does she stand for?”

Le Pen is a French attorney and politician.  She is the President of the National Front party (FN), and the youngest daughter of long-time FN leader Jean-Marie Le Pen.  She is described as more Democratic and Republican than her nationalist father.  Le Pen has led a movement of “de-demonization of the front national” to detoxify it and soften its image based on renovated positions and renewed teams, also expelling controversial members accused of racism and antisemitism.  She also expelled her own father from the party on August 20, 2015.  She has also relaxed some political positions of the party, advocating for civil unions for same-sex couples instead of her party’s previous opposition to legal recognition of same-sex partnerships, and accepting unconditional abortion and withdrawing the death penalty from her platform.

Le Pen denounces what she calls the “ultra-liberal economic model,” globalization, open borders and “massive immigration,” notably of Muslims.  In her view, immigrants take jobs from the French, raises the terrorism risk, and like a thief in the night, are stealing away the identity of France.

On the following platform points she sounds quite similar to Donald Trump:

Her first move, if elected, will be working to spring France from the European Union, and her first trip will be to Brussels to try to extract her country from the euro currency, border agreements, and other critical domains. It’s a battle she apparently sees as lost in advance since she has a plan b: a Brexit-style exit referendum, some are already calling it Frexit.

Buoyed by the populist wave washing across Europe, Marine remains the favorite to win the first round of her country’s presidential election, according to recent polls, but the surveys also show Le Pen’s anti-Euro, anti-immigrant National Front (FN) party losing the subsequent runoff against either the center-right party candidate François Fillon or centrist candidate Emmanuel Macron.

Sounds a lot like Donald Trump.  The experts said Trump would never win.  The experts in France are saying the same thing now about Marine Le Pen. Stay tuned to find out what happens in just a few weeks!

Please keep your questions coming to American Truth Project and our social media on facebook or twitter.  If we select your question you will get a special gift. We’re here to answer your urgent questions because you asked, I’m Barry Nussbaum.

Because You Asked: Who Is Ahmed Daqamseh and Why Is He Important?

Because You Asked: Is The First Amendment under Attack on American College Campuses?