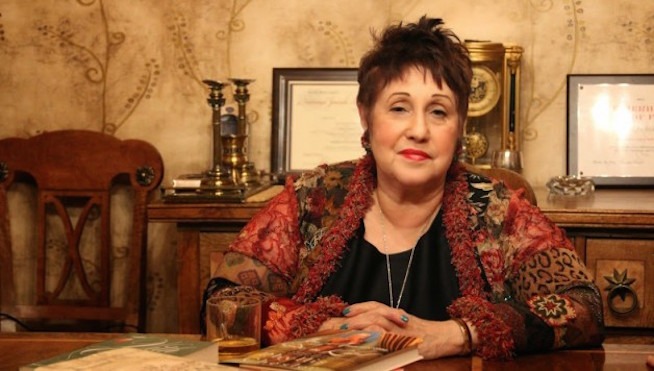 An ATP Report Production – on this episode Barry Nussbaum talks about yet another deviation from normalcy on yet another American college campus.

As viewers of “Because You Asked” know, for some time we have been reporting on the bizarre behavior that is taking place on college campuses across America.  We have been examining what has been causing this transformation of once great colleges into an alternative universe where normal behavior has largely been replaced by a lack of morality, ethics, and free speech.

Today on Because You Asked, we are going to report on yet another deviation from normalcy on yet another American college campus.  We will answer the question who is Phyllis Chesler and why is her story so important today?

Phyllis Chesler is a psychologist, and author of 16 books, including the best-seller Women and Madness (1972).  Chesler has written on topics such as gender, feminism, pornography, incest, prostitution, and violence against women.

In more recent years, she has become widely known for her writings on subjects covering antisemitism, honor killings and Islam.  Chesler argues that many western intellectuals, including leftists and feminists, have abandoned western values in the name of multicultural relativism, and that this has led to an alliance with Islamists, an increase in antisemitism, and the abandonment of Muslim women and religious minorities in Muslim-majority countries.

It appears that the recent events at the University of Arkansas are proving her thesis!

Chesler’s participation in a University of Arkansas, Fayetteville, symposium on honor killings earlier this month was cancelled just days before the event.  She was invited to deliver a lunchtime lecture on “worldwide trends in honor killings” at a conference on “violence in the name of honor: confronting and responding to honor killings and forced marriage in the west” on April 13 thru 14.  Honor killings are the killing of a relative, usually a girl or woman, who is perceived to have brought dishonor on the family.

The event was co-sponsored by the law school and the Saudi Arabia funded King Fahd center for middle east studies.

That is the same Saudi Arabia that strictly enforces Sharia law against women in the kingdom.  The country that kills gays, where women can’t drive, or leave home without an escort, and imprisons and stones women to death who commit the crime of adultery (adultery is often the label put on a woman who is raped and has the gall to identify her attacker)!  Saudi Arabia, where honor killing goes on constantly and is part of the culture and the religion.

Three professors plotted to isolate and besmirch Chesler should their efforts to disinvite her fail.  The three demanded that a “qualified” speaker, i.e., one who disagreed with her, follow Chesler’s remarks, that the school publicly withdraw its sponsorship, and that it provides copies of “Islamophobia is Racism,” a flagrantly biased, pro-Islamist bibliography “created by a collective of academics, for distribution at the symposium.”  To complete their virtue signaling, a statement would be read condemning islamophobia and bigotry.

What a joke! And yet they were successful!  Chesler was dis-invited!

Strict Sharia law triumphed in Fayetteville last week.  Chesler’s scholarship exposing the horrific crimes of honor killings and forced marriages sank her invitation not because she’s “Islamophobic,” but precisely because her work undermines the Wahhabi-funded cult of victimology.  By its tenets, because all Muslims are victims of western colonialism and prejudice, no exposure of systemic social problems in Muslim societies, including the brutal slaughter of women, can be allowed, much less supported.  In other words, publicizing the horror that women are enduring is not allowed because it makes their form of Islam look bad!

I contacted Phyllis and asked for her input on what she would have spoken about and why she was disinvited, this is what she told me:

” I was going to talk about my four published studies about honor killing.  Ironically, the data has led me to conclude that human sacrifice is a tribal custom, not specific to any one religion–but that no religion has abolished it.  Hindus perpetrate it in India, but only in India, while Muslims perpetrate it globally and bring it with them to the west. The three professors who fought to have me dis-invited cared more about defending Palestine and exterminating Israel than they did about my research into Islam.  I know this because the other speakers spoke about honor based violence, including honor killing and were not dis-invited.”

Chesler was charged with “Islamophobia,” a verbal weapon created to question the emotional stability of its targets and silence all criticism of Islam rather than advance debate.  Islamaphobia to the Saudi money and the professors they have bought and paid for, is anyone who is brave enough to tell the truth about what happens to women under Sharia.

Phyllis Chesler is one of those brave women.  She deserves our support and gratitude for having the courage to speak out truthfully and forcefully.  Go to her website: phyllis-chesler.com.  Help this brave woman support the truth!

Please keep your questions coming to American Truth Project and our social media on Facebook or twitter.  If we select your question you will get a special gift!  You can also write to me directly by sending me an email to: barry@3xu.0c4.myftpupload.com.  And join our mailing list on AmericanTruthProject.org so you get the latest reports first! And its free!

We’re here to answer your urgent questions because you asked.   I’m Barry Nussbaum.

Because You Asked: Will President Trump Be Successful in His Quest for Middle East Peace?