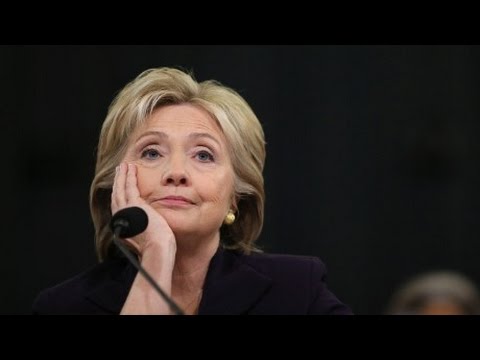 An ATP Report Production – On This Episode Barry Nussbaum highlights some of the infamous Hillary lies that came back to haunt her on election night.

On a speaking tour to explain why she is not the 45th President of the United States, Hillary Clinton said recently, “I take absolute personal responsibility. I was the candidate, I was the person who was on the ballot. I am very aware of the challenges, the problems, the shortfalls that we had,” before adding that she was “on the way to winning until a combination of Jim Comey’s letter on October 28 and Russian WikiLeaks raised doubts in the minds of people who were inclined to vote for me and got scared off.”

What she didn’t explain is that in the last weeks of the campaign while Donald Trump was doing up to nine personal appearances per day across the swing states of Michigan, Ohio, and Pennsylvania, Clinton basically ignored those states.  In addition, the Comey letter and the WikiLeaks (there is still no proof it was the Russians) were tied to her behavior regarding a private server which violated numerous state department regulations.

Today on The Truth Report, we will examine a bit of Hillary’s political history, her stunning loss to Donald Trump in November, and highlight the news that is about her past, in which she had trouble figuring out the truth!

Let’s begin with her latest announcement in the same speech in which she blamed her election loss on FBI director James Comey, Hillary Clinton said this, “I’m now back to being an activist citizen and part of the resistance,” Clinton said in her sit-down with CNN’s Christiane Amanpour. At other events, she has heralded the work of small organizations that have grown in response to Trump.  “Activism is more important than ever, and it’s working, from the women’s marches across the country and around the globe to helping to bring down the republicans’ terrible health care bill,” Clinton said earlier this year in Texas, “but we have to keep going.”  The organization Onward Together, a homage to her campaign slogan, will look to identify groups that could benefit from outside funding. Clinton will act as the connector, said one source, bringing donors to these groups and helping raise money for them, too.

So, as Hillary moves forward jumping back in to raise money as part of the resistance, with all the baggage she has created by putting out various positions that have proven false over and over again, who will believe her this time?

Let’s take a brief look at some of the more famous ones.

These are just four examples of the dozens of instances where Hillary Clinton’s non-truthful statements have been documented by video, there are hundreds on YouTube.  Given that past, is it any wonder that there is a lack of enthusiasm within the democrat party for her return to podium?

Stay in touch, we will be following up on this story!   You can write to me directly by sending me an email to: barry@3xu.0c4.myftpupload.com.  And go to our website americantruthproject.org where you can sign up to be on our mailing list so you never miss an important episode.

You can handle the truth, and we intend to bring it to you! I’m Barry Nussbaum.

Because You Asked: Macron won with open border policy!

Because You Asked: Will President Trump Be Successful in His Quest for Middle East Peace?