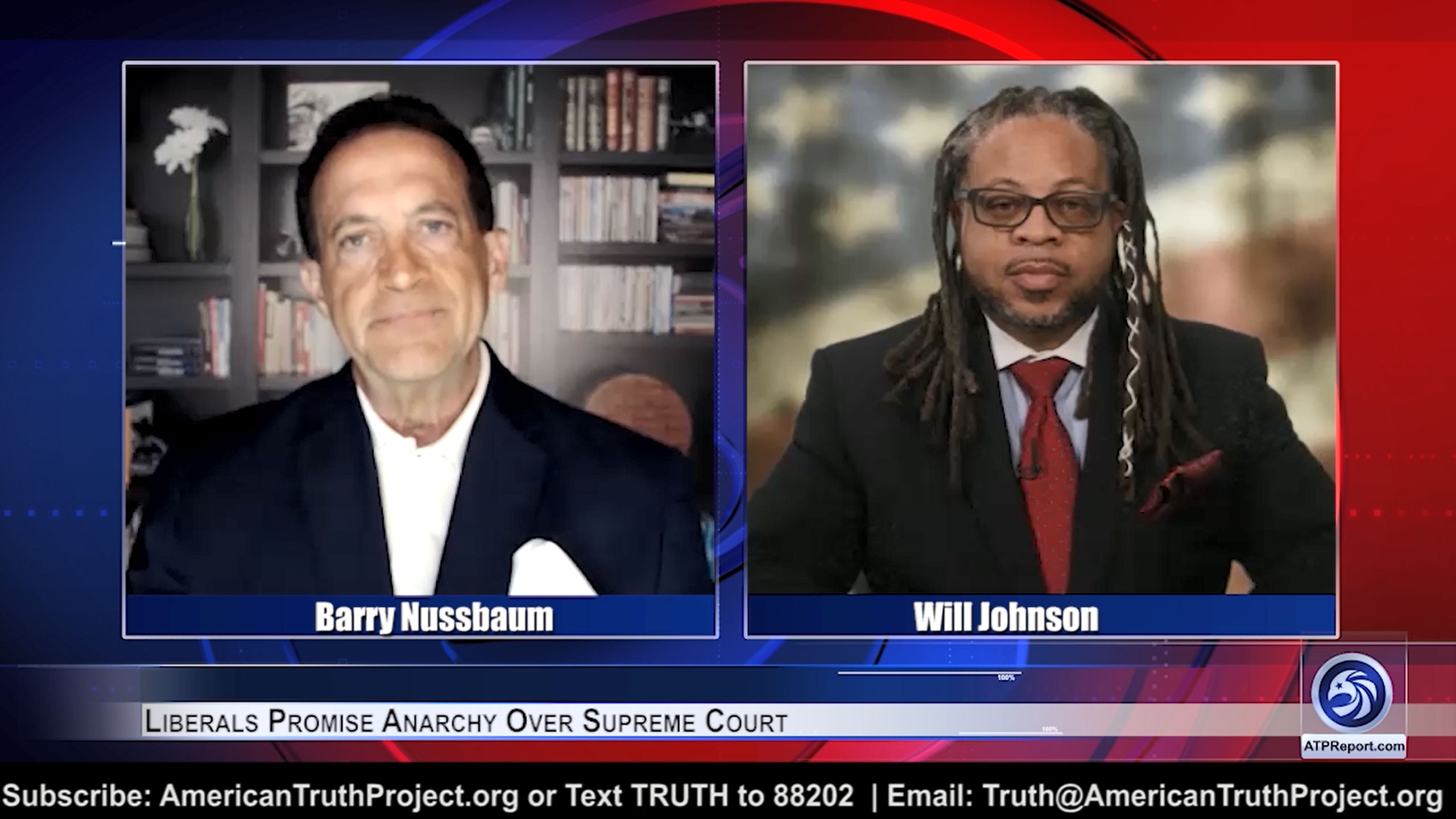 Barry Nussbaum: Hello and welcome to ATP Report, I’m Barry Nussbaum. Our very special guest and friend of ATP is with us today from across the country. Will Johnson is here. Will is a very highly regarded commentator on all things political. He has a wonderful website, UniteAmericaFirst. He has an enormous following both here in the United States and all around the political world. Welcome, Will Johnson.

Will Johnson: Hey, thank you for having me, Barry, I’m glad to be here.

Barry Nussbaum: Such an honor to have you, my friend. So the big news right now that everybody talks about nonstop is the passing of the ninth member of the Supreme Court last week, Ruth Bader Ginsburg. She served from 1993, when she was appointed by Bill Clinton, until her death on September 18th. Bill Clinton nominated her. At the time, she was viewed as a liberal. She has since been viewed as a very liberal jurist. She’s a hero to many people, both on the left and in the judicial community, and now there’s a vacancy on the Supreme Court. All hell has broken loose in the last several days, and that’s what I brought you on today, Will, to talk about it. You would think a new nomination to the Supreme Court would be just, well, regular business in Washington. Because, after all, it’s the President’s responsibility to quickly name a nominee that he picks. Send the nominee to the Senate who investigates, advises, and consents. Meaning they do their investigation, they have their hearings, and then they vote. But all the rules have gone out the window in the last couple of days, and literally, the left has declared war on the Constitution. In other words, they are literally saying that if President Trump nominates someone in an election year, there’s going to be a revolution. Let’s start with Don Lemon, our favorite commentator on CNN. He’s on every night. He’s got an enormous audience, or at least an enormous CNN audience. And he said the other night that he’s willing to blow up the entire system so the Democrats can retake all the levers of power in Washington, D.C., meaning if Trump does his job and nominates someone to fill the empty seat Don Lemon, the newscaster, with an enormous audience who, by the way, apparently is approved by CNN because there was no condemnation still has his job after mouthing off like that. What do you make of the political scene in America where a national news commentator can threaten to burn it all down?

Will Johnson: Well, you know, it’s not surprising that this is taking place. You have all of those on the left, Kathy Griffin, Snoop Dogg, Madonna. You know, Snoop Dogg was depicted shooting the President, and Kathy Griffin had a severed head of Trump. Madonna says we should blow up the White House. And there’s been countless other ones that have come out and said these horrible things towards President Trump and even to the United States. But because they are on the left Barry, they get a pass. You know, they get a pass because they’re just so frustrated. You know, for them, they believe they are in the right by being so hateful and wanting to tear everything down. And for Don Lemon to make this statement, he basically put out the signal to Antifa and BLM, hey, we know that you’ve been out in the streets burning everything, so we need for you to start blowing up everything. That’s exactly what that was. It’s a signal.

Barry Nussbaum: I’m going to tell you one more quote from CNN, and then we got to discuss what the heck is going on at that place. Let’s talk about another very famous CNN personality. He was Muslim, and then he became a non-Muslim. I guess he’s Muslim again. He’s a commentator. He’s an author. He’s on CNN all the time. His name is Reza Aslan. His quote is even worse, and I’m going to read it word for word. He said, “If they try to replace RBG, meaning Ruth Bader Ginsburg, we burn the entire F-ing thing down,” unquote. How is it possible that CNN, which I mean, is a news network, can get away with this and CNN and its management leave these people on the air, Will? They’re calling for open anarchy, aren’t they?

Will Johnson: It’s funny because you said they are a news network. It’s not even news any longer. They have people with opinion pieces. They’re just talkshow hosts. And you’re absolutely right. They’re calling for anarchy. They’re calling for people to go out and be destructive. They’re absolutely doing it. And you know what? The entire organization at CNN, and it’s not just CNN, MSDNC, all of the other alphabet network groups, all of them out there, they hate this President with the passion. And not only that, they hate him so much, they’re willing to burn the country down to get to him. And, you know, President Trump at his speech, he said he is in between total tyranny and the and our freedoms. And the Democrats wanted to get rid of him because they want total tyranny.

Barry Nussbaum: I’m reading so many quotes that we could spend the next hour on the air together. People are talking about going to the Senate. I think this is attributed to the Chief of Staff of the Governor of California, Gavin Newsom, who said I would be willing to go to Washington and lay on the floor of the Senate just so they can’t vote to confirm the new justice. Now, keep in mind, there is no justice that has been nominated. Nobody knows who Trump’s going to pick. They’re just sure whoever the Trump nominee is, that that person is going to be horrible and will destroy the country. Is it so bad in this country now that anything a Republican does is looked at as the work of the devil?

Will Johnson: Well, that’s just it. The devil is trying to convince everyone else that they are doing his job. When the Democrats, they adhere to everything of the devil. You know, one of the things I always mention to people, I say that if Satan went to the DNC and was speaking to everyone at the DNC, which policy would they disagree with that he presents? A lot of people never think about that. They would probably stand up and applaud. I mean, standing ovation. They will love everything he has to say. Now for Gavin Newsom or any politician, any Democrat governor who wants to go and disrupt President Trump from following the U.S. Constitution personally, if they do that, the Sergeant at Arms should arrest them immediately and have them locked up. Seriously and put it on camera so all of us can see it. I would love to see Gavin Newsom in handcuffs, to be honest with you.

Barry Nussbaum: Let’s talk about that constitutional issue as we sort of alluded to, Will. It’s the job of the President to fill vacancies. If he doesn’t do it, he’s breaking his job contract with the Constitution and the American people. And in fact, if you go back in history, just four years ago, Ruth Bader Ginsburg in a speech said the President doesn’t serve three years, the President serves four years. So if there is a vacancy in the fourth year, the President ought to do the President’s job and make a nomination. And Justice Sotomayor, who was also appointed to the court by President Obama, seconded that motion. So you have two justices saying up till the day the President leaves office, the President should do his or her job. Yet now, four years later, every single Democrat and every single “expert” politician in Hollywood has come out and said it’s an abomination, it will destroy the country and God forbid there’s a nomination to the court. Because RBG said as her dying words were recorded on her deathbed, I’m not making light of it, by the way, supposedly said, “Don’t replace me until the next election.” So she jumped out of her previous statement allegedly. I mean, nobody was there to record it that I know of and decided to become a politician instead of a constitutionalist. Is there any justification, Will, for the President not doing his job?

Will Johnson: No, there is no justification. I mean, I would be highly upset if President Trump does not select somebody just to be honest with you because we have to. I mentioned this to you before about the mail-in ballots. Why why are they so upset that she died? And I’ve talked to some Democrats, and I’ve seen some Democrats post that they’re upset that she passed because they wanted to cheat the system come November and have it go to next to the Congress and then from Congress, go over to the Supreme Court, and then the Supreme Court gets to decide. But now that she’s gone and now if President Trump can appoint someone, uh-oh, the Democrats are in trouble because their whole sinister plan on taking over just fell apart. Now they have to go to plan F and all the other letters that they can come up with. They’re scrambling. That’s why they’re so angry right now. They’re willing to burn everything down because they see what was happening here. Even if she did, let’s just say she did make that announcement saying don’t select anyone until the next President. I’m sorry, but the U.S. Constitution does not grant last wishes. It doesn’t. The U.S. Constitution is supposed to be for the President to adhere to.

Barry Nussbaum: You know, I think you made two very smart points, Will. The second one, I agree with one hundred percent, and the first one you made, I think this very well could end up in the Supreme Court, sort of like the hanging chads in Florida with Gore. And I think the Democrats were banking on the fact that the court would not be able to give the election to Trump even if he deserved it. And there would be some sort of interim President, which would be Nancy Pelosi as Speaker of the House until God knows when in 2021. And that is scary, indeed.

Barry Nussbaum: Will, thank you for coming on today and chatting about this for a minute. Tell people where they can find you again, would you, please?

Barry Nussbaum: You know what? Everybody should go. Everybody should support Will Johnson. He’s got a unique take on the news, and every day he’s got an update. And for those of you that haven’t subscribed yet to our mobile system, all you have to do is take out your cell phone, text the word TRUTH and send it by text to 88202. You’ll be automatically subscribed. You’ll get all of our stuff for free, like this show and all the shows with Will Johnson and our other experts. For ATP Report, thanks for joining us. I’m Barry Nussbaum.