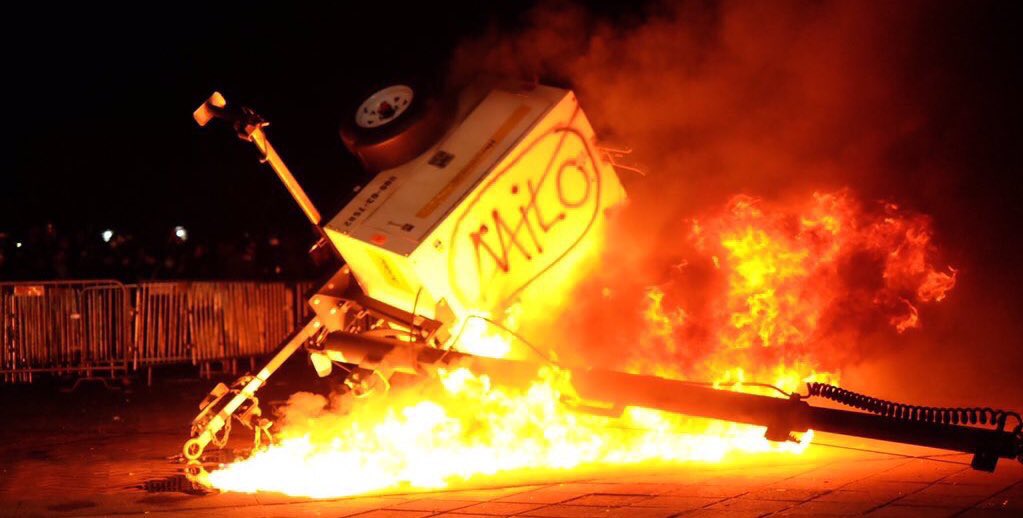 Welcome to this segment of Because You Asked, I’m Barry Nussbaum!

Over the past few days there have been a number of riots, or near riots, intended to inhibit the first amendment rights of speakers on college campuses in the United States.  As a follow-up to our earlier story of a few weeks ago, a number of you are asking, “is the first amendment under attack on college campuses?”  Here is the evidence, let’s review it together and then decide.

A few weeks ago, we did a story about the riot on the Berkeley campus of the University of California.  This riot was intended to block a conservative speaker from appearing on campus.  The rioters caused extensive damage and injured a number of people.  Their mission was successful in that conservative Milo Yanapolis was forced to leave the hall escorted by armed guards as the rioters spray painted buildings, broke windows and started fires.  Since then there’s been a follow up riot in Berkeley.  Unlike the first one a few weeks ago, during this outbreak actual arrests were made.  Quite an improvement from the riot on the Berkeley campus when police were instructed to not intervene

Milo’s planned speech was intended to draw attention to the fact that the University of California campus is a sanctuary state wide, this means that it intentionally and knowingly harbors illegal aliens from law enforcement.

Who was behind it that first attack on freedom of speech?  Well to begin with there were bused in protestors dressed in black from head to toe and wearing ski masks.  Many were armed with pipes, sledgehammers, fireworks, torches, and at least one with pepper spray; the pepper spray in the face of one student was caught on live TV while she was being interviewed.  The students and their non-student supporters were very well organized, and came ready for mayhem!  Some came with spray paint that was applied to campus buildings showing their lack of support for President Trump.  Remember the “F Trump” slogans sprayed on the buildings?  Shades of Berkeley this past weekend at Middlebury college in Vermont.  This esteemed liberal arts college founded in 1801 disgraced itself when hundreds of students screamed in a lecture hall until the invited speaker, a conservative scholar and professor from another school, was forced to leave the hall!  As he was escorted out of the hall, he and a Middlebury college professor were physically attacked and one was transported to the hospital.  The honor code at Middlebury requires strict punishment for behavior such as this.  It will be interesting to see if Middlebury reacts like Berkeley did.  There were zero consequences for the students at Berkeley.  Now there are a large number Middlebury students who absolutely refuse to allow first amendment rights of expression on their campus if it differs from their opinion will they get the “Berkeley punishment”.  There is a difference to point out, the Berkeley riot on campus of several weeks ago caused significant damage to buildings and property and a number of attendees of the speech that didn’t take place or physically battered.  No one has been charged whatsoever on that campus.  Let’s see if Middlebury makes the same mistake.

The crazy bizarre attack on freedom of speech is spreading!  A University of Washington Tacoma writing center press release told students that expecting Americans to use proper grammar perpetuates racism.  The University of Nebraska Omaha will host a workshop for “anti-racist allies” to develop “action plans” that confront America’s “foundation of systemic oppression” in the context of “the current political climate.”  The workshop was inspired by professor Tammie Kennedy’s recent book, titled “Rhetorics of Whiteness”.  She will lead a discussion on “taking action against white supremacy”.

Black students at the University of Michigan demand campus officials provide them with a permanent designated space on central campus for black students and students of color to organize and do social justice work.

Bob Lange is an associate professor emeritus of physics and an adjunct associate professor at Brandeis University’s Heller School for social policy and management.  He says, “it is not terrorism to kill representatives of a government that you are opposed to”.  His remarks were reported by Canary Mission, a group of students who document people and groups who are promoting hatred of the USA, Israel and the Jewish people, particularly on American college campuses.  It reports that Lange maintained that the 2012 terrorist attacks on the American diplomatic compound in Benghazi, Libya, which killed four people and injured 10 others, were “not terrorism”.

So, to answer your question, “is the first amendment under attack on college campuses?”  the answer should be obvious!  A resounding yes!

What can be done you ask to protect the first amendment rights of all students?  It’s simple: enforce the on-campus rules and enforce the law,  punish those who cause rights to be taken away protected free speech and this insane behavior will stop.

Please keep your questions coming to American Truth Project and our social media on facebook or twitter.  If we select your question you will get a special gift.  We’re here to answer your urgent questions because you asked, I’m Barry Nussbaum.

Because You Asked: Who Is Marine LePen and What Does She Stand For?