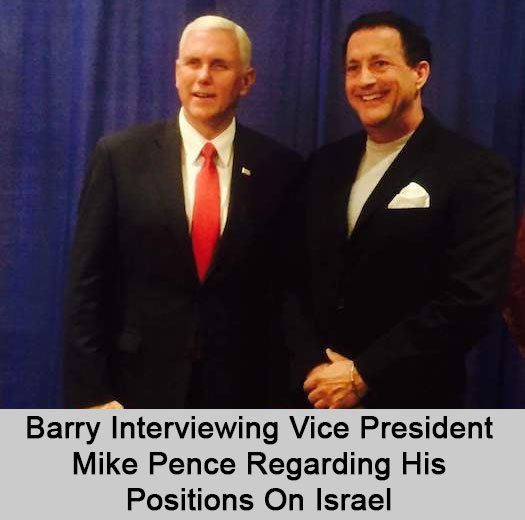 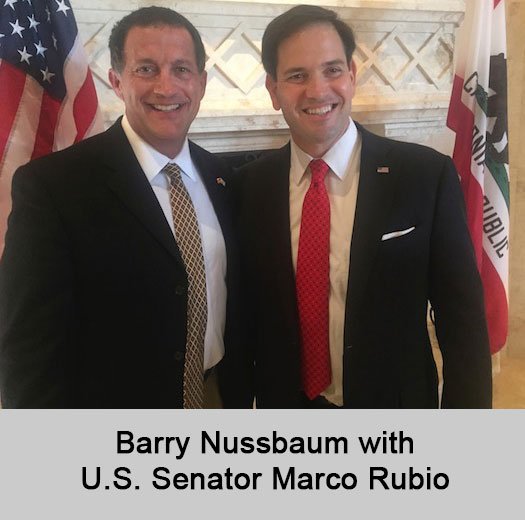 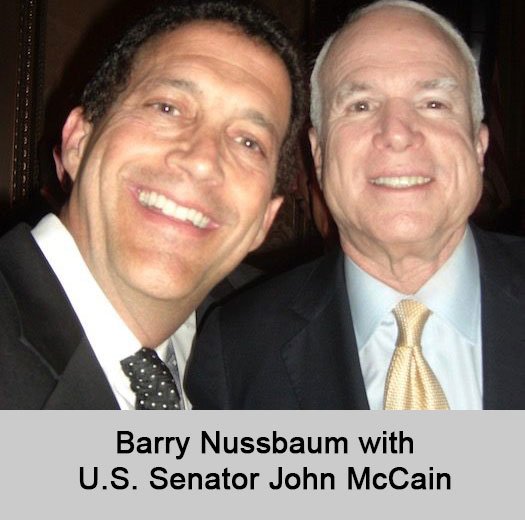 Barry Nussbaum is an exceptional American businessman and real estate mogul, whose distinguished career extends more than 38 years. He is an experienced news commentator on international affairs, who has been featured on major television networks, web-based and in print media.

Mr. Nussbaum has more than 20 years of experience working on local, state and national political campaigns and has been a consultant on a variety of campaigns over the years including Senator Marco Rubio for President, Massachusetts Governor Mitt Romney for President, Meg Whitman for Governor of California, Juan Vargas for Congress, Darrell Issa for Congress, Elise Stefanik for Congress, Duncan Hunter for Congress, and also holocaust survivor Tom Lantos for Congress. As a longtime advocate on domestic policy and foreign relations, Mr. Nussbaum has met with key leaders such as Senator Al Gore, Senator John McCain, speakers of the House John Boehner and Newt Gingrich and others.

As the longest serving president of the San Diego County Fair Board, Mr. Nussbaum successfully oversaw a $65 million annual budget, running the most esteemed ocean front state property in California. In addition, he served terms as Chairman of California State Racetrack Authority and State Racetrack Leasing Commission, the proprietor of the Del Mar Racetrack; the most successful racetrack in the United States.

Mr. Nussbaum is a renowned expert on foreign policy and particularly U.S./Israel relations. His interest and dedication to the U.S./Israel relationship began early in life as the son of Eleanor and Emery Nussbaum; both survivors of the holocaust in Auschwitz, Poland. While in the second grade, he discovered, that he is a first-generation holocaust survivor while reading a story in a local newspaper.

Mr. Nussbaum has championed work in strengthening U.S./Israel relations as an active member of American Israel Public Affairs Committee (AIPAC) for the past 15 years, meeting with members of Congress and national staff throughout the U.S. Mr. Nussbaum was a member of the Anti-Defamation League (ADL) the premier organization that fights prejudice of all kinds, especially anti-Semitism. As a man who embraces the core values of integrity and justice, he has been a dynamic leader working with the Jewish National Fund, which develops Israel’s national resources such as desalination, water recycling, irrigation, forestation, dams and infrastructure.
His travels to Europe, the Mediterranean, and Israel have awarded Mr. Nussbaum an opportunity to meet personally with President of Israel Shimon Perez, Israeli Prime Minister Benjamin Netanyahu and with members of Israel government, Knesset, Israeli military and the Israeli intelligence community to discuss Israeli foreign relations, defense policy and mutual security concerns.
In 2014, Mr. Nussbaum further extended his commitment by co-founding The Israel Group; an organization dedicated to combating the anti-Semitic Boycott, Divest and Sanction movement (also known as BDS) and its demonization of Israel within United States.
Mr. Nussbaum has been featured extensively as a political commentator on international affairs on PBS, CBS, ABC, NBC, Fox San Diego, The Rick Amato Show, One America News Network and in print mediums such as Wall Street Journal and Bloomberg and has met with numerous editorial boards.

The American Truth Project , a non-profit (501c3) organization was launched because America’s national security is being threatened as never before. Our republic and the rights guaranteed by our constitution are facing dangerous new enemies, both foreign and domestic.

• The Israel Group , a Non-Profit organization which raises awareness about and protects Israel.
• March to Save America ,which arranged a day of speakers who demonstrated on the steps of Congress to protest the Iran Nuclear Deal. Featured speakers included many members of Congress and then Candidate Donald Trump.