BARRY’S TAKE: In a speech that looks like he is now working for the Iranian foreign ministry instead of his paying job as U.S. Secretary of State, John Kerry pleaded with the Senate to not impose new sanctions in spite of Iran’s consistent belligerent behavior.

Apparently there is no amount of aggressive behavior by Iran that Kerry would consider worthy of new sanctions…..Capturing and humiliating U.S. Navy sailors? Nope. 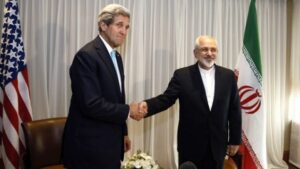 Developing and launching long range ballistic missiles? Nope. Flying a surveillance drone over a U.S. aircraft carrier and publishing the video of the encounter? Nope. Signing purchase orders for new squadrons of advanced fighter jets from China? Nope. Ordering new missile systems from Russia? Nope. Encouraging murder of Israel citizens by paying each “martyr” $7000 per death, and their family $30,000 for each house that is destroyed? Nope.

The Senate is not happy with how they are spending their $150 billion, and yet Kerry says new sanctions would “not be helpful.”

In testimony Wednesday before a Senate panel, Kerry says he’d prefer to wait and see how implementation of the landmark nuclear deal goes before making a decision on imposing additional measures to punish Tehran for its belligerent behavior.

Lawmakers are considering legislation that would address Iran’s ballistic missile tests, human rights violations and a reauthorization of the Iran Sanctions Act.